This article examines Friedrich Schlegel’s theory of philological practice and presents it as crucial for any philology that seeks to establish its philosophical ground without taking resort to theory. Schlegel’s concepts and the form of argument he employs, as illustrated in his notes “On Philology”, are elucidated. Schlegel focuses on ‘cyclization’ as a reiterated critique of a non-discursive practice that eventually leads to a mastership akin to art. Schlegel’s “Lucinde” is—as the article demonstrates—to be read as a novel that serves this philological purpose. Finally, the question of how to deal with art as a telos of philology in times of the modern university is discussed, with the conclusion being that we have to distinguish between the process of gaining insight and the discursive justification of that insight.

The linguistic uniformity of Europe (or the globe) is currently enforced not only by powerful economic and political forces but also by sociologists and social philosophers. At first, the learning of global English was only considered to be a necessary professional skill, then, the positive connotations of “plurilingualism” were evoked for fostering its universal adoption. Now, the acquisition of “globalese” is promoted as a means to achieve social justice. The rhetoric of justice immunises this discourse against any criticism (what can you say against justice?). Its political aims and measures are reminiscent of the aims and measures of the linguistic Jacobinism in the French Revolution. The propagandistic moves of the social sciences are accompanied by a polemic against linguistic diversity and the connection of language to culture. They are based on a reductive conception of language that underestimates their cognitive and, hence, cultural potential.

If as many observers believe the very survival of philology is in doubt across much of the globe, what are appropriate responses? Answering that question requires answering two others: what is philology, after all, and why should it be preserved? A new definition is offered here for the disciplinary form of philology: its distinctive subject is making sense of texts, its distinctive theoretical concept is interpretation, and its distinctive research methods include text-critical, rhetorical, hermeneutic and other forms of analysis. The point of preserving philology is to preserve the core values it encourages us to cultivate: commitments to truth, human solidarity, and critical self-awareness. The redefinition is meant to help free philology from itself, and identifying core values is meant to help us understand how philology can free us, both as scholars and as citizens.

Drawing on recent calls for a return to philology and on the experience of the international research programme “zukunftsphilologie: Revisiting the Canons of Textual Scholarship” this essay seeks to problematise these calls by examining some of the potential and fruitful avenues of inquiry as well as some of the challenges that lie ahead for a future “world philology.”

Qurʾānic scholarship in the west today tends to privilege historical queries, focusing on fragmented texts, their alleged subtexts, and the codex’s earliest venues of transmission. It usually abstains from attempts at making sense of the text as a literary artifact, let alone as an epistemic intervention into the reception of the Bible. Such concerns are left to philology which—if we follow Sheldon Pollock—is a tripartite venture: a query for “textual meaning,” an investigation into the text’s traditional understanding, i.e. its “contextual meaning,” and finally a re-thinking of one’s own scholarly preconceptions and responsibilities, the “philologist’s meaning.” Few topics are better suited to demonstrate the urgency of complementing historical with philological research than the Qurʾān’s controversial relation to the Bible. A fresh approach—updating the time-honored but somewhat fusty historical critical method—is required: a diachronic, yet contextual, and moreover holistic, reading of the Qurʾān. This paper will discuss texts that—featuring Muhammad and Moses respectively—reveal two major shifts in the relationship between the Qurʾān and Biblical tradition.

Historical research should not be left alone: philology’s two assets, the contextual reading and moreover the researcher’s self-reflection, need to be admitted to the stage of Qurʾānic Studies. Christian interpretation of the Bible that, for historical and political reasons, has until now not taken the Qurʾān into account, could benefit substantially from the Qurʾān’s Biblical criticism, let alone its intrinsic challenge to rethink prevailing exclusivist positions.

Protagonists of the ‘philological turn’ have claimed philology to be a self-reflective praxis. The history of modern philology however demonstrates that this can only be understood as a demand. All too often, philological conceptions went hand in glove with a deterministic anthropology. Whereas current research on the nexus between philology and racial thought focus on how biopolitical assumptions could be applied within philological disciplines, the idea of a ‘hard’ anthropological nucleus and a ‘soft’ textual culture referring to it needs to be revised. Because of their methodological potential and cultural strength, European philologies were scientific models up to the second half of the 19th century and relied on the same epistemic assumptions from which ‘modern’ raciological discourses were born. This comes mainly from the relation established since the 17th century between the variety of languages, scripts and textual cultures on the one hand, and rationality on the other. The arguments that stem from this discourse of a challenged universalism were amalgamated with genealogical thought in 19th century philology and an obsession with origins as the biblical narrative faded away. Thus, spiritual or cognitive forms, understood as determining factors in historical evolution, could then be linked to an assumed ‘original’ intellectual or anthropological potentiality. However, raciological conceptualizations have been far from being without alternative. My paper argues that if the return to philology aims to be more than a reaction to the normative loss of textual culture, then the epistemological struggle within the history of philology needs to be reflected in its relevance for any ‘future’ philology.

This article explores the unique textual dynamism of the Sanskrit Purāṇas, considering it as an essential feature of Purāṇa as a genre. While early textual scholars looked upon the extreme eclecticism and textual instability of this literature with disdain, the Purāṇas themselves were aware of their own fluctuation as a corpus, making efforts to justify it while also taming it, all the while boldly asserting Purāṇa’s canonical status and its ultimate coherence and authority. The complex and varied strategies that Purāṇa texts take in achieving these goals take on new significance in locating the origins of this genre in the new orthodox but inclusivist theistic movements of the early centuries of the Common Era, which operated on the frontiers of brahmanical culture. Purāṇa was a textual form conceived by such groups, and perfectly suited to the dissemination of their particular doctrines and practices. As such, Purāṇa was “frontier literature” in two senses: in the first place, it was composed and deployed primarily on the geographical margins of brahmanical orthopraxis; and secondly, the distinctive textual editability of Purāṇa texts made Purāṇa a site of constant sectarian and ideological contestation. 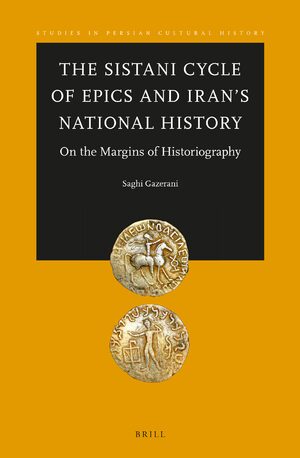 In: The Sistani Cycle of Epics and Iran’s National History

2 The Appropriation of an Avestan Hero and the Birth of the House of Rostam
Author: Saghi Gazerani

In: The Sistani Cycle of Epics and Iran’s National History