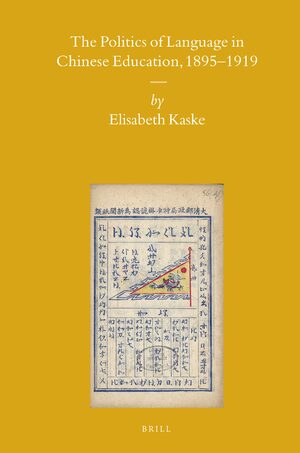 The Politics of Language in Chinese Education, 1895–1919
Series: Sinica Leidensia, Volume: 82
Author: Elisabeth Kaske
The study examines the origins of the “literary revolution” proclaimed in 1917 which laid the foundation for the replacement of the classical language by the vernacular as China’s national language and medium of national literature. A unique, multifaceted approach is used to explain the political significance of the classical/vernacular divide against the backdrop of social change that followed the Sino-Japanese War of 1894-5. Seeing education as the central battleground for all debates on language, the study in six thoroughly documented chapters investigates the language policy of the Qing and Republican governments, vernacular journalism of the revolutionaries, the activities of urban script reformers, the linguistic thought of the national essence advocates, and the emergence of a scholarly interest in the vernacular in academic circles.
E-Book

Contradictions and Conflict
A Dialectical Political Anthropology of a University in Western India
Series: Studies in Human Society, Volume: 9
Author: Donald V. Kurtz
This work analyzes the history of conflict in one Indian university. Scholars representing Maharashtrian Brahman and non-Brahman castes embedded in the university's postgraduate campus and urban and rural colleges have fought for over forty years to control university government. The structure of these castes, institutional and regional contradictions, suggests that conflict will persist.
The book explores the history of conflict from 1924 to 1989 and proposes a dialectical methodology to analyze the conflict. It examines the agents and dramatic conflicts that engaged them. Finally, it suggests a dialectical political anthropology for understanding politics anthropologically.
The work suggests that a dialectical methodology focused on internal social contradictions provides a superior analysis of conflicts that impel historical agency, and that universities, largely ignored by anthropologists, are exciting reservoirs for ethnographic research.
Paperback