The East Asian Modern Girl
Women, Media, and Colonial Modernity in the Interwar Years
Series: Modern Asian Art and Visual Culture, Volume: 6
Author: Sumei Wang
The East Asian Modern Girl reports the long-neglected experiences of modern women in East Asia during the interwar period. The edited volume includes original studies on the modern girl in Taiwan, Korea, Manchuria, Japan, Shanghai, and Hong Kong, which reveal differentiated forms of colonial modernity, influences of global media and the struggles of women at the time. The advent of the East Asian modern girl is particularly meaningful for it signifies a separation from traditional Confucian influences and progression toward global media and capitalism, which involves high political and economic tension between the East and West. This book presents geo-historical investigations on the multi-force triggered phenomenon and how it eventually contributed to greater post-war transformations.
Hardback 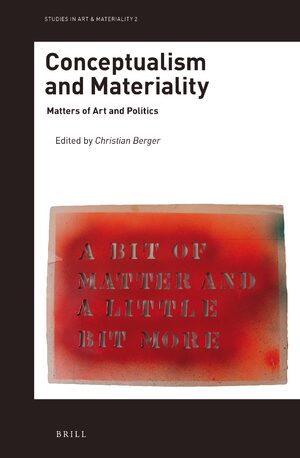 Conceptualism and Materiality
Matters of Art and Politics
Series: Studies in Art & Materiality, Volume: 2
Editor: Christian Berger
Conceptualism and Materiality. Matters of Art and Politics underscores the significance of materials and materiality within Conceptual art and conceptualism more broadly. It challenges the notion of conceptualism as an idea-centered, anti-materialist enterprise, and highlights the political implications thereof.
The essays focus on the importance of material considerations for artists working during the 1960s and 1970s in different parts of the world. In reconsidering conceptualism’s neglected material aspects, the authors reveal the rich range of artistic inquiries into theoretical and political notions of matter and material. Their studies revise and diversify the account of this important chapter in the history of twentieth-century art — a reassessment that carries wider implications for the study of art and materiality in general.
E-Book