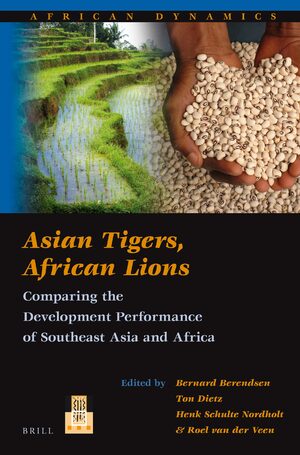 Asian Tigers, African Lions
Comparing the Development Performance of Southeast Asia and Africa
Series: African Dynamics, Volume: 12
Editors: Bernard Berendsen, Ton Dietz, H.G.C. Schulte Nordholt and Roel van der Veen
Asian Tigers, African Lions is an anthology of contributions by scholars and (former) diplomats related to the ‘Tracking Development’ research project, funded by the Netherlands Ministry of Foreign Affairs, and coordinated by the African Studies Centre and KITLV, both in Leiden, in collaboration with scholars based in Africa and Asia. The project compared the performance of growth and development of four pairs of countries in Southeast Asia and Sub-Sahara Africa during the last sixty years. It tried to answer the question how two regions with comparable levels of income per capita in the 1950s could diverge so rapidly. Why are there so many Asian tigers and not yet so many African lions? What could Africa learn from Southeast Asian development trajectories?

11. A Comparison of the Industrial Policies and Outcomes in Kenya and Malaysia
Authors: Bethuel K. Kinuthia and Ton Dietz

14. The Variation in Output and Marketing of Cashew in Tanzania and Vietnam
Author: Blandina Kilama

15. The Textile Industry in Vietnam and Tanzania
Author: Jamal Msami