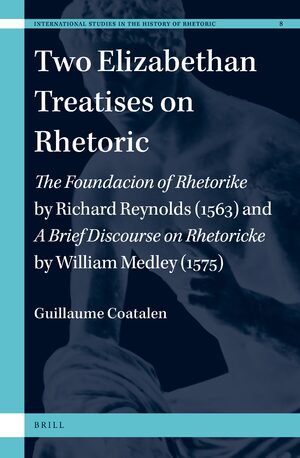 Two Elizabethan Treatises on Rhetoric
The Foundacion of Rhetorike by Richard Reynolds (1563) and A Brief Discourse on Rhetoricke by William Medley (1575)
Series: International Studies in the History of Rhetoric, Volume: 8
Author: Guillaume A. Coatalen
Sixteenth century Elizabethan treatises on rhetoric in the vernacular are relatively rare. Guillaume Coatalen offers annotated editions of Richard Reynolds’s The Foundacion of Rhetorike (1563), which has not been edited since the 1945 facsimile edition, and of William Medley’s unknown Brief Discourse on Rhetoricke which survives in a single manuscript dated 1575. While Reynolds’s work is an English adaptation of Aphthonius's Progymnasmata and a preparation for Thomas Wilson’s influential Arte of Rhetoricke (1560), Medley’s is broader in scope and contains the only full treatment of periodic prose in English in the period. Both works are essential to understand how Elizabethan rhetoric in the vernacular evolved, in particular in aristocratic circles, and its links with Continental developments, notably German.
E-Book