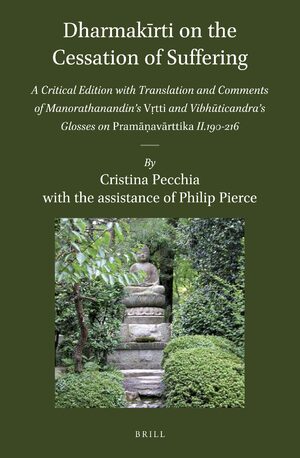 Dharmakīrti on the Cessation of Suffering
A Critical Edition with Translation and Comments of Manorathanandinʼs Vṛtti and Vibhūticandraʼs Glosses on Pramāṇavārttika II.190-216
Series: Brill's Indological Library, Volume: 47
Editors: Cristina Pecchia and Philip Pierce
Liberation is a fundamental subject in South Asian doctrinal and philosophical reflection. This book is a study of the discussion of liberation from suffering presented by Dharmakīrti, one of the most influential Indian philosophers. It includes an edition and translation of the section on the cessation of suffering according to Manorathanandin, the last commentator on Dharmakīrti’s Pramāṇavārttika in the Sanskrit cosmopolis. The edition is based on the manuscript used by Sāṅkṛtyāyana and other sources. Methodological issues related to editing ancient Sanskrit texts are examined, while expanding on the activity of ancient pandits and modern editors.
E-Book