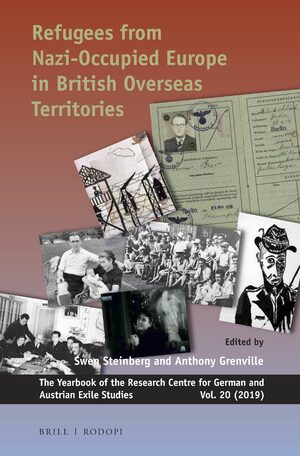 Refugees from Nazi-occupied Europe in British Overseas Territories
Series: Yearbook of the Research Centre for German and Austrian Exile Studies, Volume: 20
Editors: Swen Steinberg and Anthony Grenville
Refugees from Nazi-occupied Europe in British Overseas Territories focusses on exiles and forced migrants in British colonies and dominions in Africa or Asia and in Commonwealth countries. The contributions deal with aspects such as legal status and internment, rescue and relief, identity and belonging, the Central European encounter with the colonial and post-colonial world, memories and generations or knowledge transfers and cultural representations in writing, painting, architecture, music and filmmaking. The volume covers refugee destinations and the situation on arrival, reorientation–and very often further migration after the Second World War–in Australia, Canada, India, Kenya, Palestine, Shanghai, Singapore, South Africa and New Zealand. 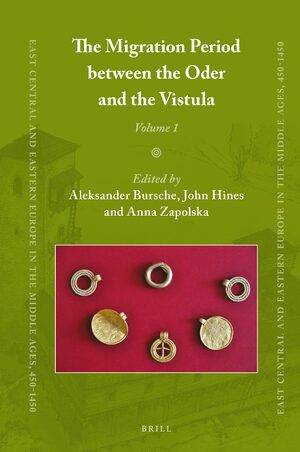 The Migration Period between the Oder and the Vistula (2 vols)
Series: East Central and Eastern Europe in the Middle Ages, 450-1450, Volume: 59
Editors: Aleksander Bursche, John Hines and Anna Zapolska
This collection of studies is the result of a six-year interdisciplinary research project undertaken by an international team of archaeologists, historians, numismatists and paleobotanists. It constitutes a completely new approach to environmental, cultural and settlement changes during the Migration Period in Central Europe.

Part One discusses written sources, theories regarding migration, and environmental change in the first millennium AD. In Part Two, archaeological sources relating to Central Europe in the Migration Period are analysed, while Part Three is devoted to new discoveries between the Oder and the Vistula, including traces of Germanic settlement in northern Poland in the early seventh century. In Part Four, evidence for cultural and settlement changes in neighbouring areas is characterized in a comparative light.
E-Book 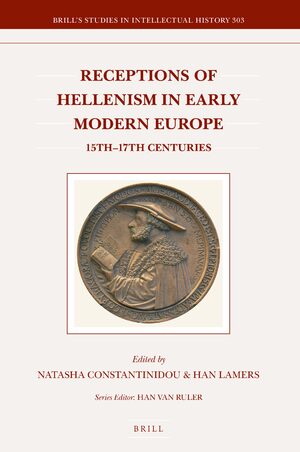 Receptions of Hellenism in Early Modern Europe
15th-17th Centuries
Series: Brill's Studies in Intellectual History, Volume: 303
Editors: Natasha Constantinidou and Han Lamers
This volume, edited by Natasha Constantinidou and Han Lamers, investigates modes of receiving and responding to Greeks, Greece, and Greek in early modern Europe (15th-17th centuries). The book's seventeen detailed studies illuminate the reception of Greek culture (the classical, Byzantine, and even post-Byzantine traditions), the Greek language (ancient, vernacular, and 'humanist'), as well as the people claiming, or being assigned, Greek identities during this period in different geographical and cultural contexts.
Discussing subjects as diverse as, for example, Greek studies and the Reformation, artistic interchange between Greek East and Latin West, networks of communication in the Greek diaspora, and the ramifications of Greek antiquarianism, the book aims at encouraging a more concerted debate about the role of Hellenism in early modern Europe that goes beyond disciplinary boundaries, and opening ways towards a more over-arching understanding of this multifaceted cultural phenomenon.

Dispersals and Diversification
Linguistic and Archaeological Perspectives on the Early Stages of Indo-European
Series: Brill's Studies in Indo-European Languages & Linguistics, Volume: 19
Editors: Matilde Serangeli and Thomas Olander
Dispersals and diversification offers linguistic and archaeological perspectives on the disintegration of Proto-Indo-European, the ancestor of the Indo-European language family.
Two chapters discuss the early phases of the disintegration of Proto-Indo-European from an archaeological perspective, integrating and interpreting the new evidence from ancient DNA. Six chapters analyse the intricate relationship between the Anatolian branch of Indo-European, probably the first one to separate, and the remaining branches. Three chapters are concerned with the most important unsolved problems of Indo-European subgrouping, namely the status of the postulated Italo-Celtic and Graeco-Armenian subgroups. Two chapters discuss methodological problems with linguistic subgrouping and with the attempt to correlate linguistics and archaeology.

Mating networks are a new category of measurable human relationships, recently revealed by studies of ancient DNA. Mating networks were regional human populations with distinctive combinations of genetic traits. Because languages usually were learned from the same parental sources that provided genes, languages probably showed at least an equivalent level of regional patterning and diversity. Four genetically defined mating networks are relevant for understanding the genetic characteristics of the steppe populations that probably spoke Proto-Indo-European dialects. These four mating networks are named and described and their changing relationships with each other are reviewed using a combination of archaeological and genetic evidence. The still-undecided question of where the oldest phase of PIE was spoken is reviewed, with suggestions for resolving where and when the separation of Anatolian, the first and oldest split in the Indo-European (IE) language family, occurred.

Chapter 6 And Now for Something Completely Different? Interrogating Culture and Social Change in Early Indo-European Studies
Author: James A. Johnson

The concept of culture is a topic of shared interest for archaeologists and historical linguists alike. Despite its still prevalent usage in both disciplines, the concept of culture is an area of study that is highly problematic, and over the last three decades, increasingly contentious in the social sciences and humanities. There are two primary problems with culture and its application in (Proto-)Indo-European studies as I (and others) see it. First, there is the intellectual packaging and subsequent presentation of culture as a social totality. Participation in such totalities is defined and identified archaeologically by: the use of one or more peculiar items, including but not limited to decorative styles and vessel forms of pottery, the use of certain types of tools and/or weapons, and certain styles of burial rite. The first problem with such a conceptualization of culture is the perpetuation of limits or borders that reify culture as bounded, behavioral, and symbolic totalities that undergo change homogenously. The second problem is how social change is approached as denouement, or climax of cultural progress before rapid change. Such approaches fail to acknowledge and, more importantly, to investigate the juxtaposition of change and continuity experienced by different communities within these supposedly bounded entities. This paper addresses these problems and the subsequent issues that arise when trying to integrate the multiple methodologies employed by archaeologists, historical linguists, and geneticists to help develop more comprehensive understandings of human social action and processes in prehistory.

Chapter 7 The Archaeology of Proto-Indo-European and Proto-Anatolian: Locating the Split
Author: Kristian Kristiansen

The 4th millennium BC stands out as a period of increasing interaction between the Caucasus, Anatolia, the Levant and Greece, stimulated by movements of groups of people at land and sea, including the Black Sea coast (Bauer 2011), which had both genetic (Damgaard et al. 2018; Lazaridis et al. 2017; Wu et al. 2018), cultural and linguistic consequences, including Anatolian, which split off during the early to mid 4th millennium BC from early Maykop groups in the northern Caucasus. After the middle of the 4th millennium steppe Maykop expanded north, leading to the formation of the Yamnaya Culture and Proto-Indo-European, which by the beginning of the 3rd millennium saw the development of ancient Tocharian and the first migrations towards the east (Altai) and the west (Europe). Thus, for reasons given below, I argue for the “Indo-Hittite” hypothesis, using “Proto-Indo-Anatolian” for the source of both (Proto-)Anatolian and the rest of the Indo-European languages, reserving “Proto-Indo-European” for the source of the non-Anatolian languages.

Cladistic hypotheses are ideally based on arguments that use cumulative evidence from a wide range of shared innovations inherited from a more recent ancestor. The majority of historical linguists would agree that the best evidence for subgrouping would be shared phonological and morphological innovations, while evidence from proportions of shared lexical cognacy is less reliable for linguistic subgrouping. Recent high-profile studies have appeared, however, that have been based exclusively on comparative lexical material. The results of these methods have been sharply criticised, but in spite of the criticisms to cognacy-based approaches, there remains some potential that the lexical cognacy may provide some useful data to supplement cladistic hypotheses as part of an overall assessment of the complete bundle of available isoglosses. If lexical cognacy judgements can be treated as a potential source of data for cladistic hypotheses, how can they be implemented in a methodologically rigorous way? This chapter focuses on case studies from methodological issues that have arisen in encoding Indo-European lexical cognacy data on the Indo-European Cognate Relationships (IE-CoR) database project based at the Max Planck Institute for the Science of Human History. These issues are illustrated through case studies from problems that have arisen in assigning cognacy coding to lexical data. As such this chapter contributes a discussion towards improving the reliability of cognacy data for cladistic analyses as a supplement to more traditional analyses based on comparative phonological and morphological criteria.

Chapter 5 Did Proto-Indo-European Have a Word for Wheat? Hittite šeppit(t)- Revisited and the Rise of Post-PIE Cereal Terminology
Author: Adam Hyllested

Hittite šeppit(t)- ‘(a kind of) wheat’ can be identified as a borrowing from Akkadian or another Semitic language, identical to the Mediterranean culture-word that has ended up in English as semnel. There is thus no basis for a PIE reconstruction *sép-it meaning ‘wheat’. The very suffix *-it, which Watkins (1978) interpreted as a marker for ‘(basic) foodstuffs’, is likewise a phantom. Balkan Indo-European *álbʰ-it and Iranian *arpucya-, both ‘barley’, are borrowings from separate dialectal reflexes of Turkic *arpa ‘barley’; the former acquired its suffix in analogy with *mél-it ‘honey’ because the two terms were interpreted as *albʰ- ‘white’ and *mel- ‘dark’, respectively—an important distinction in ritual contexts.