This paper examines the role of Internet Service Providers as bridges and intermediaries between private persons, organizations even government arms and the Internet and the liabilities placed on them by the law with regard to wrongful acts of their subscribers or clients under the laws of Nigeria. It is common knowledge that actions againstISPs are commonest with defamation and infringement of copyright. The legal framework in theUSand the UKare examined to determine if there are lessons to learn for Nigeria. The Nigerian legal framework also places some responsibilities on ISPs with regard to crime prevention and prosecution. This is because private rights are not yet much of an issue in the Nigerian cyberspace. The paper points out that much of the regulation governingISPs liability in respect of civil matters do not have legislative power but are mere guidelines and suggests that theUSand UKpatterns have a lot to offer Nigeria.

The 2018 Petroleum Host and Impacted Communities Development Trust Bill before the Nigerian National Assembly was proposed to foster sustainable development (SD) and embed corporate social responsibility (CSR) in the oil and gas corporate activities within host communities. From the backdrop of SD and CSR as regulatory concepts, this article scrutinizes the Bill for its viability to realize its objectives in its current form. It raises concerns about: (i) perceived negligence by the government to provide social services and public goods, seeming to outsource such responsibilities to the business community; (ii) the reduction of CSR to capital or community development projects; and (iii) the absence of useful delimitation criteria to determine host and impacted communities. The article argues that past mistakes are being rehashed and queries the capacity of the Bill to live up to stakeholders’ expectations. Using the normative contributions of global templates such as the United Nations Guiding Principles on Business and Human Rights, the article recommends policy and regulatory changes to the Bill’s governance structure towards embedding effective CSR and engendering SD in the Nigerian oil and gas industry.

How Intellectuals Censor the Intellect: (Mis-)Representation of Traditional History and its Consequences
Author: Majid Daneshgar

This essay will explore how the intellects of both scholars and their audiences are censored. In addition to various Western thinkers, particular attention will be paid to Ali Shari'ati, one of the most influential thinkers of modern Iran, and how he represented an important Islamic tradition. Not only did his ideas inspire revolutionary acts by generations of Iranians, but Turkish, Arab, Malay, Indonesian, and Indian philosophers, sociologists, theologians, and politicians have all employed his definitions of concepts such as justice, injustice, revolution, corruption, and bliss. This article sheds light both on how intellectuals influence their audience, and their long-term impact on broader communities. In order to do so, it will analyze the material and political conditions that censor both what scholars are able to say, and what their audiences are allowed to hear.

Mapping Discourse and Agency in a Refugee Context: An Interview With Reem Doukmak
Author: Reem Doukmak

The Modality of Climate Change in the Middle East: Drought or Drying up?
Author: Nasser Karami

Due to its widespread political and social consequences, the relationship between drought and climate change in the Middle East has been widely reported on by the media. Climate change is mainly understood within the paradigm: “prolonged drought is created and intensified by global warming.” The purpose of the study is to review this paradigm and examine aspects of it. Thus, climate trends in the Middle East are studied across three periods: 1900–1970, 1970–2000, and 2000–2017. Due to the importance of studying sequences of drought occurrence based on timescales of climatic patterns, the climatic trends of the Khuzestan Plain, were examined too. The results show that to have a clear understanding of both the modality of climate change in the Middle East and the current dominant paradigm, predominant assumptions of the paradigm should be reconsidered. For example, prolonged droughts are part of the natural pattern of climate in the Middle East, although the current drought has not been recorded for at least 100 years. This claim is based on the fact that prolonged droughts in this region can have natural causes, which can be studied as long-term climate trends, although the impact of global warming on the escalation of the Middle Eastern drought is undeniable. However, the exacerbating effect of non-anthropogenic factors on the impact of drought in the region should be studied, too. Additionally, as an epistemological assumption, the term “drying up” (as a new normal and permanent climatic pattern) should be used instead of “drought” (as a normal and reversible pattern) to determine the current climate change situation in the Middle East. The author concludes that the findings emphasize the need for further research in order to identify the modality of climate change in the Middle East.

It is estimated that between 2008 and 2014, 4.7 million people were displaced due to natural disasters in Bangladesh and that by 2050, one in every seven people in Bangladesh will be displaced by climate change. The subject matter of this paper is based on a theoretical analysis of various existing social and legal barriers relating to climate displacement in Bangladesh. This article critically analyses the social and legal barriers to helping Climate Change Displaced People (cdp) by drawing on existing legal literature such as the Bangladeshi constitution and qualitative data from Bangladesh’s experience with cdp. Ultimately, this article corroborates the lack of a coherent human rights framework for cdp in Bangladesh and suggests international cooperation as a first step towards a functioning regime.

The carbon budget of planet earth is regulated by the soil compartment in all types of ecosystems. We conducted a first order analysis of soc in November 2017 both in the mangrove dominated Indian Sundarbans and the highly urbanized city of Kolkata with the aim of identifying the natural and anthropogenic contributions of organic carbon in soil. We also attempted to analyze the spatial variation of soc between these two significantly different ecosystems. We observed a comparatively higher mean value of soc in Kolkata (2.06%) than in the Sundarbans (1.25%). The significant spatial variation in soc between Kolkata and the Sundarbans (p < 0.05) may be attributed to anthropogenic stress, which is of greater magnitude in the city of Kolkata. The significant spatial variation in soc between north and south Kolkata (p < 0.05) is due to the efficiency of the drainage system in the north and the magnitude of city limit expansion in the south. In the Sundarban deltaic complex, a natural phenomenon like erosion seems to be a determining factor in the domain of soil carbon dynamics. soc analyses of all major metropolises around the world, of which Kolkata is one, are essential to understand the carbon sequestration potential of urban soils. 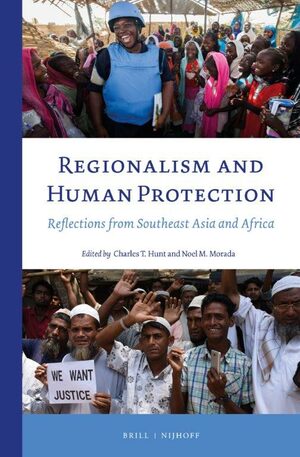 Regionalism and Human Protection
Reflections from Southeast Asia and Africa
Editors: Charles T. Hunt and Noel M. Morada
This book provides a detailed examination of how norms concerning human rights, civilian protection and prevention of mass atrocities have fared in the regions of Southeast Asia and Africa. Originated as a spin off of the journal GR2P (vol. 8/2-3, 2016), it has been enriched with new chapters and revised contents, which contrast the different experiences of those regions and investigates the expression of human protection norms in regional organisations and thematic policy agendas as well as the role of civil society mechanisms/processes. Hunt and Morada have brought together scholar-practitioners from across the world.The collection identifies a range of insights that provide rich opportunities for south-south exchange and mutual learning when it comes to promoting and building capacity for human protection at the regional level.
E-Book