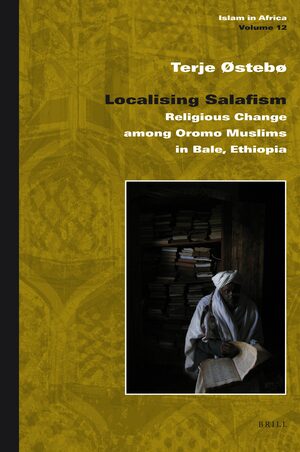 Localising Salafism
Religious Change among Oromo Muslims in Bale, Ethiopia
Series: Islam in Africa, Volume: 12
Author: Terje Østebø
The political transition in 1991 and the new regime’s policy towards the ethnic and religious diversity in Ethiopia have contributed to increased activities from various Islamic reform movements. Among these, we find the Salafi movement which expanded rapidly throughout the 1990s, particularly in the Oromo-speaking south-eastern parts of the country. This book sheds light on the emergence and expansion of Salafism in Bale. Focusing on the diversified body of situated actors and their role in the process of religious change, it discusses the early arrival of Salafism in the late 1960s, follows it through the Marxist period (1974-1991) before discussing the rapid expansion of the movement in the 1990s. The movement’s dynamics and the controversies emerging as a result of the reforms are discussed, particularly with reference to different understandings of sources for religious knowledge and the role of Islamic literacy.
E-Book