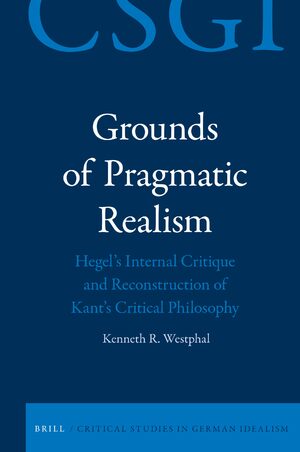 Grounds of Pragmatic Realism
Hegel's Internal Critique and Reconstruction of Kant's Critical Philosophy
Series: Critical Studies in German Idealism, Volume: 20
Author: Kenneth Westphal
Grounds of Pragmatic Realism argues that Hegel’s philosophy from the 1807 Phenomenology of Spirit through his last Berlin lectures on philosophical psychology demonstates how Kant’s critique of rational judgment across his Critical corpus can be disentangled from Kant’s failed Transcendental Idealism and developed into a cogent, pragmatic realism, within which the social and historical aspects of rational inquiry and justification are shown to justify realism about the objects of empirical knowledge. Hegel’s demonstration reveals how deeply contemporary epistemology remains beholden to pre-Critical options, none of which are adequate to the natural sciences, nor to commonsense. Hegel recognised and justified (independently) Kant’s semantics of singular cognitive reference to particulars within space and time. Hegel’s analysis of mutual recognition develops Kant’s insights into the self-critical and inter-subjective aspects of rational judgment and justification, to show that none of us can be properly rational judges, nor can we properly justify our judgments rationally, without constructive self-criticism and without acknowledging and benefitting from constructive critical assessment by others.
E-Book