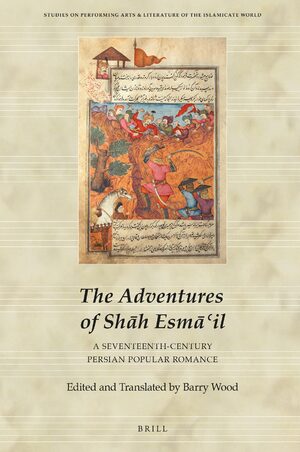 The Adventures of Shāh Esmāʿil
A Seventeenth-Century Persian Popular Romance
Series: Studies on Performing Arts & Literature of the Islamicate World, Volume: 8
Author: Barry Wood
The Adventures of Shāh Esmāʿil recounts the dramatic formative years of the Safavid empire (1501–1722), as preserved in Iranian popular memory by coffeehouse storytellers and written down in manuscripts starting in the late seventeenth century. Beginning with the Safavids’ saintly ancestors in Ardabil, the story goes on to relate the conquests of Shāh Esmāʿil (r. 1501–1524) and his devoted Qezelbāsh followers as they battle Torkmāns, Uzbeks, Ottomans, and even Georgians and Ethiopians in their quest to establish a Twelver Shiʿi realm. Barry Wood’s translation brings out the verve and popular tone of the Persian text. A heady mixture of history and legend, The Adventures of Shāh Esmāʿil sheds important light on the historical self-awareness of late Safavid Iran.
E-Book