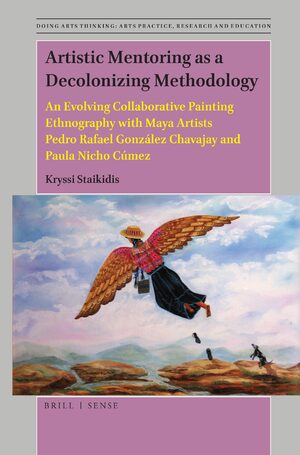 The primary purpose of the book is to illuminate the Maya artists as mentors, the collaborative and holistic processes underlying their painting, and the teaching and insights from their studios. These include Imagined Realism, a process excluding rendering from observation, and the fusion of pedagogy and curriculum into a holistic paradigm of decentralized teaching, negotiated curriculum, personal and cultural narrative as thematic content, and the surrounding visual culture and community as text.

The Maya artist as cultural historian creates paintings as platforms of protest and vehicles of cultural transmission, for example, genocide witnessed in paintings as historical evidence. The mentored artist as ethnographer cedes the traditional ethnographic authority of the colonizing stance to the Indigenous expert as partner and mentor, and under this mentorship analyzes its possibilities as decolonizing arts-based qualitative inquiry. For the teacher, Maya world views broaden and integrate arts practice and arts research, inaugurating possibilities to transform arts education.
E-Book 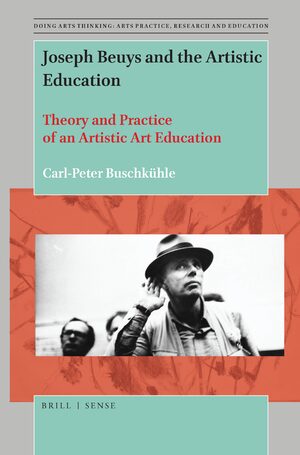 Joseph Beuys and the Artistic Education
Theory and Practice of an Artistic Art Education
Series: Doing Arts Thinking: Arts Practice, Research and Education, Volume: 6
Author: Carl-Peter Buschkühle
Joseph Beuys significantly influenced the development of art in recent decades through his expanded definition of art. In his art and reflections on art, he raised far-reaching questions on the nature of art and its central importance for modern education. His famous claim, “Every human is an artist,“ points to the fundamental ability of every human to be creative in the art of life – with respect to the development of one’s own personality and one’s actions within society. Beuys saw society as an artwork in a permanent process of transformation, a ‘social sculpture‘ in which every person participated, and for which everyone should be educated as comprehensively as possible.

Beuys describes pedagogy as central to his art. This book thus examines important aspects of Beuys’s art and theory and the challenges they raise for contemporary artistic education. It outlines the foundational theoretical qualities of artistic education and discusses the practice of ‘artistic projects’ in a series of empirical examples. The author, Carl-Peter Buschkühle, documents projects he has undertaken with various high school classes. In additional chapters, Mario Urlaß discusses the great value of artistic projects in primary school, and Christian Wagner reflects on his collaboration with the performance artist Wolfgang Sautermeister and school students in a socially-disadvantaged urban area.

Artistic education has become one of the most influential art-pedagogical concepts in German-speaking countries. This book presents its foundations and educational practices in English for the first time. 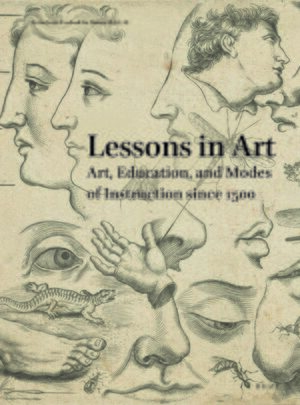 Netherlands Yearbook for History of Art / Nederlands Kunsthistorisch Jaarboek 68 (2018)
Lessons in Art. Art, Education, and Modes of Instruction since 1500
Series: Netherlands Yearbook for History of Art / Nederlands Kunsthistorisch Jaarboek, Volume: 68
Editors: Eric Jorink, Ann-Sophie Lehmann and Bart Ramakers
Why, how, to whom, and by whom was art taught? Lessons in Art (Netherlands Yearbook for History of Art, Vol 68) provides answers to these questions by addressing the relation between art and education in the Netherlands from 1500 to the 1970s. The authors gathered in this volume consider the practical and theoretical education of artists as well as the role of art and creativity for general education within a wide societal context. They present new ways of looking at teaching materials and methods, that were devised for the education of experts, and show how art and creativity were employed as powerful didactic tools for a general audience. From early-modernity to the present, education, it appears, fuels the production and perception of art.

Table of Contents
1. Ann-Sophie Lehmann & Bart Ramakers, Introduction
2. Caecilie Weissert, Clément Perret’s Exercitatio alphabetica (1569). A calligraphic textbook and sample book on eloquence
3. Koen Jonckheere, Aertsen, Rubens and the questye in early modern painting
4. Edward H. Wouk, From Lambert Lombard to Aby Warburg. Pathosformel as grammar
5. Bart Ramakers, Paper, paint, and metal foil. How to costume a tyrant in late sixteenth century Holland
6. Ann-Sophie Lehmann, An alphabet of colours. Valcooch’s Rules and the emergence of sense-based learning around 1600
7. Jenny Boulboullé, Drawn up by a learned physician from the mouths of artisans. The Mayerne manuscript revisited
8. Erin Travers, Jacob van der Gracht’s Anatomie for artists
9. Jaya Remond, ‘Draw everything that exists in the world’. ’t Light der Teken en Schilderkonst and the shaping of art education in early modern northern Europe
10. Joost Keizer, Rembrandt’s nature. The ethics of teaching style in the Dutch Republic
11. Erin Downey, Learning in Netherlandish workshops in seventeenth-century Rome
12. Annemarie Kok, Do it yourself! Lessons in participation in a dynamic labyrinth in the Stedelijk Museum Amsterdam 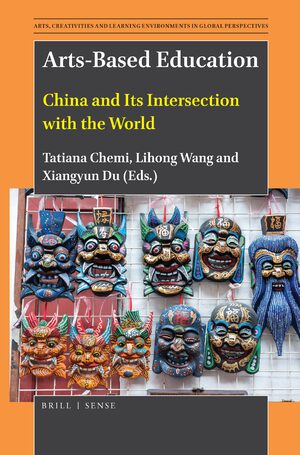 Arts-Based Education
China and Its Intersection with the World
Series: Arts, Creativities, and Learning Environments in Global Perspectives, Volume: 2
Editors: Tatiana Chemi, Lihong Wang and Xiangyun Du
Core texts addressing creativity in a number of contexts show that creativity as a scientific subject has received principally the attention of Western scholars. Is this due to the fact that Western cultures are more creative or sensitive to creativity than the Eastern cultures? The editors strongly believe that this is more due to the differences in understanding and practising creativity in the West and East than to an Eastern indifference to creativity.

Arts-Based Education: China and Its Intersection with the World investigates the field of arts-based educational practices and research. It argues that reflections on these themes must necessarily be reframed and re-read beyond the limits of colonialist oppositions and suggests a constructive and reflexive approach to theory and methodology, which takes into account intercultural and critical perspectives in these studies.

This volume is the tangible product of the acknowledgement that China and Chinese culture deserves a more systematic and up-to-date dissemination through recent studies that bring together the arts, learning and creativity. It is clustered around two themes: (1) China and its communication with the world through arts-based education in international contexts, and (2) the development of arts education in China.
E-Book 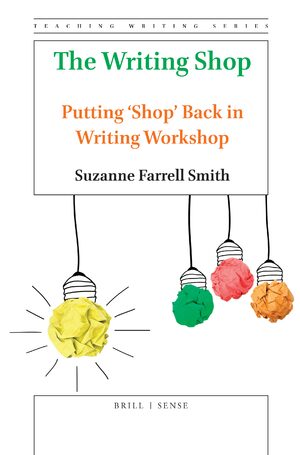 The author builds on writing workshop literature to introduce the model to newcomers, while offering practical advice for those looking to strengthen their writing instruction. The Writing Shop illustrates what happens when writing is taught in an authentic shop: play is prioritized, all types of learners are included, and a host of skills beyond the mechanics of composition are embedded in the process of learning to write.

With its stories from diverse workshops and emphasis on exploration and experimentation, The Writing Shop shows us that learning to write can be, above all things, fun.
E-Book 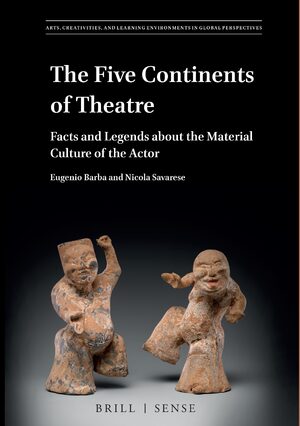 The Five Continents of Theatre
Facts and Legends about the Material Culture of the Actor
Series: Arts, Creativities, and Learning Environments in Global Perspectives, Volume: 1
Authors: Eugenio Barba and Nicola Savarese
The Five Continents of Theatre undertakes the exploration of the material culture of the actor, which involves the actors’ pragmatic relations and technical functionality, their behaviour, the norms and conventions that interact with those of the audience and the society in which actors and spectators equally take part.

The material culture of the actor is organised around body-mind techniques (see A Dictionary of Theatre Anthropology by the same authors) and auxiliary techniques whose variety concern:

■ the diverse circumstances that generate theatre performances: festive or civil occasions, celebrations of power, popular feasts such as carnival, calendar recurrences such as New Year, spring and summer festivals; ■ the financial and organisational aspects: costs, contracts, salaries, impresarios, tickets, subscriptions, tours; ■ the information to be provided to the public: announcements, posters, advertising, parades; ■ the spaces for the performance and those for the spectators: performing spaces in every possible sense of the term; ■ sets, lighting, sound, makeup, costumes, props; ■ the relations established between actor and spectator; ■ the means of transport adopted by actors and even by spectators.

Auxiliary techniques repeat themselves not only throughout different historical periods, but also across all theatrical traditions. Interacting dialectically in the stratification of practices, they respond to basic needs that are common to all traditions when a performance has to be created and staged. A comparative overview of auxiliary techniques shows that the material culture of the actor, with its diverse processes, forms and styles, stems from the way in which actors respond to those same practical needs. The authors’ research for this aspect of theatre anthropology was based on examination of practices, texts and of 1400 images, chosen as exemplars.
E-Book 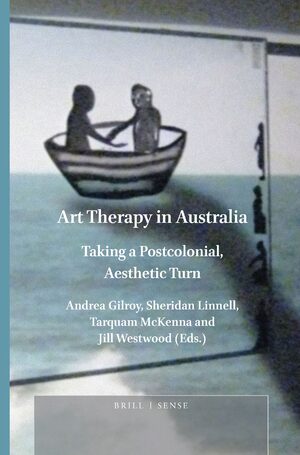 Art Therapy in Australia
Taking a Postcolonial, Aesthetic Turn
Editors: Andrea J. Gilroy, Sheridan Linnell, Tarquam McKenna and Jill Westwood
Art Therapy in Australia: Taking a Postcolonial, Aesthetic Turn explores and enacts established and emergent art therapy histories, narratives and practices in the specific postcolonial context of contemporary Australia. It is the first published book to attempt to map this terrain. In doing so, the book aims to document important aspects of art therapy in Australia, including how Australian approaches both reiterate and challenge the dominant discourse of art therapy. This book is as much a performance as an account of the potential of art therapy to honour alterity, illuminate possibilities and bear witness to the intrapsychic, relational and social realms. The book offers a selective window into the rambling assemblage that is art therapy in the ‘Great Southern Land’.