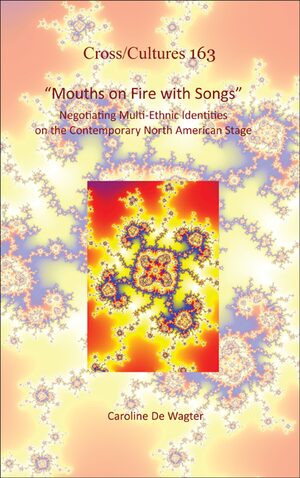 "Mouths on Fire with Songs"
Negotiating Multi-Ethnic Identities on the Contemporary North American Stage
Series: Cross/Cultures, Volume: 163
Author: Caroline De Wagter
This book, the first cross-cultural study of post-1970s anglophone Canadian and American multi-ethnic drama, invites assessment of the thematic and aesthetic contributions of this theater in today’s globalized culture. A growing number of playwrights of African, South and East Asian, and First Nations heritage have engaged with manifold socio-political and aesthetic issues in experimental works combining formal features of more classical European dramatic traditions with such elements of ethnic culture as ancestral music and dance, to interrogate the very concepts of theatricality and canonicity. Their “mouths on fire” (August Wilson), these playwrights contest stereotyped notions of authenticity. In¬spired by songs of anger, passion, experience, survival, and regeneration, the plays analyzed bespeak a burning desire to break the silence, to heal and empower. Foregrounding questions of hybridity, diaspora, cultural memory, and nation, this comparative study includes discussion of some twenty-five case studies of plays by such authors as M.J. Kang, August Wilson, Suzan–Lori Parks, Djanet Sears, Chay Yew, Padma Viswanathan, Rana Bose, Diane Glancy, and Drew Hayden Taylor. Through its cross-cultural and cross-national prism, “Mouths on Fire with Songs” shows that multi-ethnic drama is one of the most diverse and dynamic sites of cultural production in North America today.
E-Book (PDF) 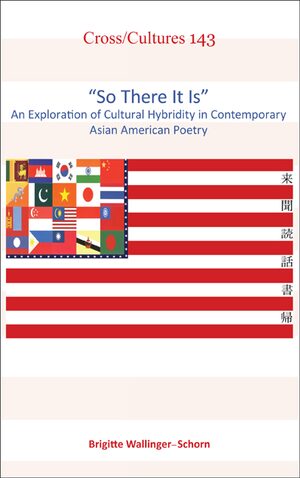 "So There It Is"
An Exploration of Cultural Hybridity in Contemporary Asian American Poetry
Series: Cross/Cultures, Volume: 143
Author: Brigitte Wallinger-Schorn
In interpreting contemporary Asian American poetry, it is important to understand the cultural hybridity of Asian America identity, located at the interstices of the fixed identifications ‘American’, ‘Asian American’, and ‘Asian’. This rootedness in more than one culture exposes the inapplicability of binary concepts (foreigner/national, etc.). Hybridity, opposing essentialism and ‘the original’, favors multivocality and ambivalence. The exploration of Asian American cultural hybridity is linked both to material realities and poetic manifestations.
Asian American hybrid subjectivity is explored through in-depth interpretations of works from well-established contemporary poets such as Kimiko Hahn, Marilyn Chin, Li-Young Lee, and Arthur Sze, as well as that of many new talents and hitherto neglected writers.
This study examines how language and power interrelate, with translation and linguistic fusion being two approaches adopted by hybrid authors in their creation of alternative discourse. Culturally hybrid subjectivity is independent of and at the same time interconnected with more than one culture, thus enabling innovative political and identitarian positions to be articulated. Also examined are such traditional poetic forms as the zuihitsu, the sonnet, and the ghazal, which continue to be used, though in modernized and often subversive guise. The formal liminal space is revealed as a source of newness and invention deconstructing eurocentric hierarchy and national myth in American society and expanding or undercutting binary constructs of racial, national, and ethnic identities.
A further question pursued is whether there are particular aesthetic modes and concepts that unite contemporary Asian American poetry when the allegiances of the practitioners are so disparate (ultimate geocultural provenience, poetic schools, regions in the USA, generations, sexual orientation, etc.). Wide-ranging interviews with Kimiko Hahn and Chitra Banerjee Divakaruni on identity and roots, language and power, feminism, and the American poetry scene provide illuminating personal yet representative answers to this and other questions.
E-Book (PDF)