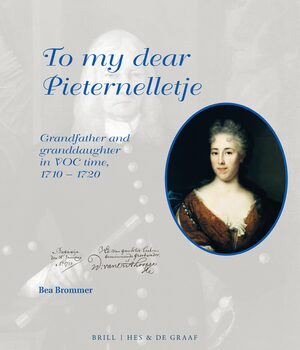 To My Dear Pieternelletje
Grandfather and Granddaughter in VOC Time, 1710-1720
Author: Bea Brommer
To my dear Pieternelletje describes a ten-year period in the lives of Pieternella van Hoorn and her grandfather Willem van Outhoorn, former governor-general of the Dutch East Indies. Eleven years old, Pieternella left for Amsterdam and the only contact possible was by mail.

Numerous letters have survived and combined with contemporaneous documents, most of them never published before, they offer a vivid and clear picture of their private life and feelings, forming a most welcome addition to official VOC-history.

Van Outhoorn not only acted as Pieternella’s mentor while she tried to adjust to her new but unknown fatherland, but also sent her numerous exquisite presents, the greater part of which has been traced and described in full, thus offering new insight in the cultural history of Asia.