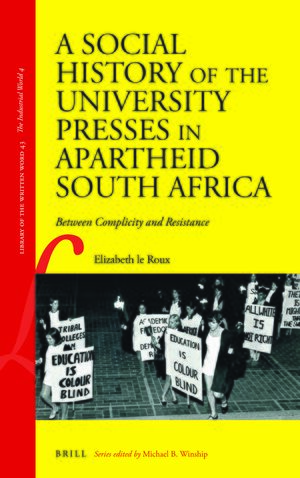 A Social History of the University Presses in Apartheid South Africa
Between Complicity and Resistance
Series: Library of the Written Word, Volume: 43and Library of the Written Word - The Industrial World, Volume: 43
Author: Elizabeth Le Roux
In A History of the University Presses in Apartheid South Africa, Elizabeth le Roux examines scholarly publishing history, academic freedom and knowledge production during the apartheid era. Using archival materials, comprehensive bibliographies, and political sociology theory, this work analyses the origins, publishing lists and philosophies of the university presses. The university presses are often associated with anti-apartheid publishing and the promotion of academic freedom, but this work reveals both greater complicity and complexity. Elizabeth le Roux demonstrates that the university presses cannot be considered oppositional – because they did not resist censorship and because they operated within the constraints of the higher education system – but their publishing strategies became more liberal over time.
E-Book