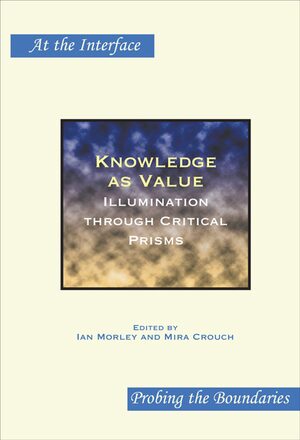 Knowledge as Value
Illumination through Critical Prisms
Series: At the Interface / Probing the Boundaries, Volume: 50
Editors: Ian Morley and Mira Crouch
This book considers the place and value of knowledge in contemporary society. “Knowledge” is not a self-evident concept: both its denotations and connotations are historically situated. Since the Enlightenment, knowledge has been a matter of discovery through effort, and “knowledge for its own sake” a taken-for-granted ideal underwriting progressive education as a process which not only taught “for” and “about” something, but also ennobled the soul. While this ideal has not been explicitly rejected, in recent decades there has been a tacit move away from a strong emphasis on its centrality, even in Higher Education. The authors address the values that inform knowledge production in its present forms, and seek to identify social and cultural factors that support these values.
Against the background of increasingly restrictive conditions of academic work, the first section of this volume offers incisive critiques of Higher Education, with examples drawn from Australia and New Zealand. The second group of chapters considers how academics have viewed, and have tried to adapt to, present circumstances. The third section comprises papers that consider epistemological issues in the generation and promulgation of knowledge. The chapters in this volume are indicative of the work that needs to be done so that we can come to comprehend – and perhaps try and improve – our relationship to learning and knowledge in the 21st Century.
This timely book will be of particular interest to workers in higher education; it should also inform and challenge all those who have concerns for the future of the intellectual life of our civilization.
E-Book

A Pedagogy of Becoming
Series: Value Inquiry Book Series, Volume: 116and Philosophy of Education, Volume: 116
Editor: Jon Mills
This book advocates a return to the spirit of the Greek notion of paideia, emphasizing a pedagogy of becoming. The authors offer a holistic approach to education that aspires toward the inclusion, promotion, and nurturance of virtue and valuation. Topics range from the purely conceptual to applied methodology. Several key issues and contemporary trends in education are addressed philosophically, including the values of wisdom, morality, compassion, empathy, interdependence, authenticity, and self-understanding.
Paperback

Values and Education
Series: Value Inquiry Book Series, Volume: 76
Editor: Thomas Magnell
This book brings together eighteen essays on education and matters of evaluative concern to which it gives rise. The essays range from discussions of basic issues on the nature of education and the importance of its two sides, teaching and learning, to practical issues that bear on curricular development. Several of the authors focus on liberal education and its place in a liberal state. Some authors take up the topic of moral education, while others examine the notion of multicultural education. Broad social issues of educational opportunity and affirmative action are also considered. A number of authors speak to educational reforms and conditions in particular countries, including Italy, Canada, and the United States. For anyone with an interest in formal education or a love of life-long learning, the essays in this book offer fresh ideas for reflection.
Paperback 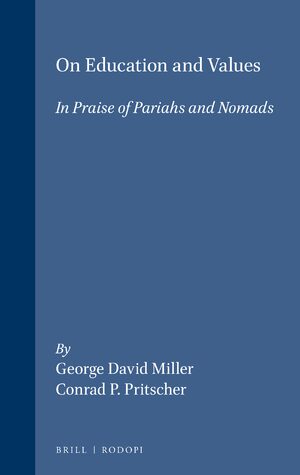 On Education and Values
In Praise of Pariahs and Nomads
Series: Value Inquiry Book Series, Volume: 34and Philosophy of Education, Volume: 34
Authors: George David Miller and Conrad P. Pritscher
The educationally emaciated, suffering from intellectual and spiritual bilumia, binge on facts and linear thinking. The imprimatur of clarity and the infatuation with quantification are accoutrements of this affliction, often characterized by apathy. Chaos is introduced as the wrecking ball for the hierarchical skyscrapers that overcrowd the educational skyline. The type of chaos proposed can be explained by the neutron bomb analogy. Chaos destroys all that is inessential but leaves standing the essential and promotes holistic rather than compartmentalized learning. The authors further contend that one insight is better than a myriad of facts; in being vigilant of serendipity; that the value-aspect of facts is as important as the facts themselves. Such beliefs form a foundation for educational holism. Our goal is to popularize philosophy in the same way science has become popular without a mass understanding. Empiricism is criticized for creating the theoretical basis for fragmentation (forming the basis for an island ideology) by excising essence. Founded on inessential empirical ideology, efforts to teach multiculturalism merely exacerbate difference, promote alienation, and discourage tolerance. Within the framework of value hierarchies we favor, tolerance is not understood as open-armed acceptance of just anything, but the forbearance of an evil for the promise of greater good. Essence cannot be removed: even in the idiosyncratic we can find the essential. In the absence of chaotic methodology, critical thinking remains an apolitical, amoral, and atemporal process displaced from social and political reality. We propose a critical thinking that is not legalistic, but is action-oriented. The pipe dream for education is a political, moral, temporal, and decompartmentalized critical thinking that disseminates philosophy across the curriculum. Those who risk becoming pariahs and nomads are essential to the rejuvenation of the educational system.
Paperback

Values, Work, Education
The Meanings of Work
Series: Value Inquiry Book Series, Volume: 22
Editors: Samuel M. Natale, Brian M. Rothschild, Joseph W. Sora and Tara M. Madden
This book is a collection of reflections and empirical studies which examine the many facets of the meanings of work. The authors are significant scholars in fields of study ranging from ethics to sociology. The book is a text which aims at balancing the academic with the practical and so the chapters often reflect the tensions implicit in such a venture. The reader will find in these pages historical, philosophical, educational, religious, entrepreneurial and many other points of view which combine to emerge as a text which is both encyclopedic in information yet engaging and lively in style. The reader will be able to understand how the meanings of work have changed over the centuries varying according to historical place and point of view. At the same time, the diligent reader will observe the centrality that work has in the lives of people both practically and in terms of life quests. Work has previously been defined as an activity that produces something of value for other people. This definition does not even begin to include the information about work that is presented in this book. The reader will feel a invigorating sense of worth from this book.
Hardback