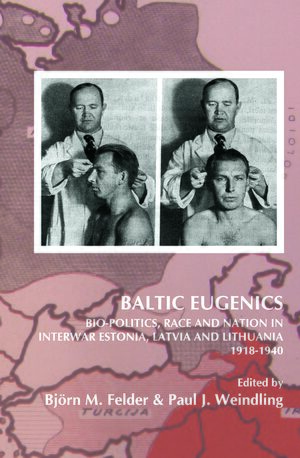 Baltic Eugenics
Bio-Politics, Race and Nation in Interwar Estonia, Latvia and Lithuania 1918-1940
Series: On the Boundary of Two Worlds, Volume: 35
Editors: Björn M. Felder and Paul J. Weindling
The history of eugenics in the Baltic States is largely unknown. The book compares for the first time the eugenic projects of Estonia, Latvia and Lithuania and the related disciplines of racial anthropology and psychiatry, and situates them within the wider European context. Strong ethno-nationalism defined the nation as a biological group, which was fostered by authoritarian regimes established in Lithuania in 1926, and in Estonia and Latvia in 1934. The eugenics projects were designed to establish a nation in biological terms. Their aims were to render the nation ethnically, genetically and racially homogeneous. The main agenda was a non-democratic state that defined its population in biological terms. Eugenic policies were to regenerate the nation and to reconstruct it as a “pure” and “original” race, Such schemes for national regeneration contained strong elements of secular religion.
E-Book (PDF)