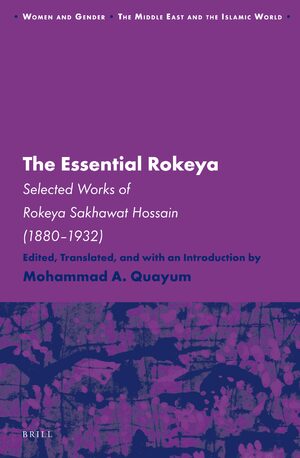 The Essential Rokeya
Selected Works of Rokeya Sakhawat Hossain (1880-1932)
Series: Women and Gender: The Middle East and the Islamic World, Volume: 13
Editor: Mohammad Quayum
In The Essential Rokeya, Mohammad A. Quayum brings together, for the first time, some of the best work by one of South Asia’s earliest and most heroic feminist writers and activists, who was also a leading figure of the Bengal Renaissance in the nineteenth and early twentieth century – Rokeya Sakhawat Hossain (1880-1932). This collection includes Rokeya’s most popular story, Sultana’s Dream, and some essays and letters written originally in English, as well as Quayum’s own translation of several of her fiction and non-fiction works written originally in Bengali. This will enable readers outside Bangladesh and West Bengal to appraise and appreciate Rokeya’s fundamental role in the feminist awakening in South Asia, especially among the Bengali Muslims of her time.
E-Book

In: The Essential Rokeya