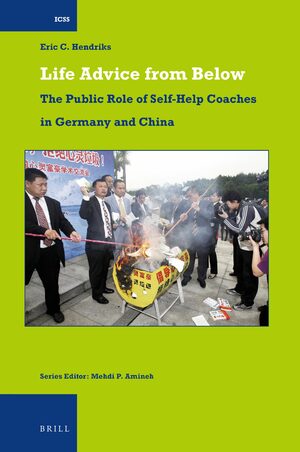 Life Advice from Below
The Public Role of Self-Help Coaches in Germany and China
Series: International Comparative Social Studies, Volume: 37
Author: Eric C. Hendriks
In Life Advice from Below, Eric C. Hendriks offers the first systematic, comparative study of the globalization of American-style self-help culture and the cultural conflicts this creates in different national contexts. The self-help guru is an archetypical American figure associated with individualism, materialism and the American Dream. Nonetheless, the self-help industry is spreading globally, thriving in China and other seemingly unlikely places. Controversy follows in its wake, as the self-help industry, operating outside of formal education and state institutions, outflanks philosophical, religious and political elites who have their own visions of the Good Life. Through a comparison of Germany and China, Hendriks analyzes how the competition between self-help gurus and institutional authorities unfolds under radically different politico-cultural regimes.

“This witty book charms its way through a very serious sociology of the seriously quirky field of self-help books. Read it for its fascinating pop-culture insights and you’ll come away with a deep understanding of contemporary sociological theory. Highly recommended.” - Salvatore Babones, University of Sydney

“Hendriks’ finding that Germany rather than China is more resistant to self-help gurus offers a powerful corrective to the assumption in much of the globalization literature that the greatest cultural divide is between the Anglo-Western European sphere and the rest of the globe.” - Rodney Benson, New York University

Labour Markets, Identities, Controversies
Reviews and Essays, 1982-2016
Series: Studies in Critical Social Sciences, Volume: 102
Author: Tom Brass
Debates about labour markets and the identity of those who, in an economic sense, circulate within them, together with the controversies such issues generate, have in the past been confined by development studies to the Third World. Now these same concerns have shifted, as the study of development has turned its attention to how these same phenomena affect metropolitan capitalist nations. For this reason, the book does not restrict the analysis of issues such as the free/unfree labour distinction and non-class identity to Third World contexts. The reviews, review essays and essays collected here also examine similar issues now evident in metropolitan capitalism, together with their political and ideological effects and implications.
E-Book