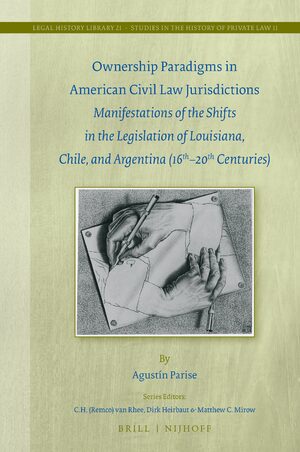 Ownership Paradigms in American Civil Law Jurisdictions
Manifestations of the Shifts in the Legislation of Louisiana, Chile, and Argentina (16th-20th Centuries)
Series: Studies in the History of Private Law, Volume: 21/11and Legal History Library, Volume: 21/11
Author: Agustín Parise
In Ownership Paradigms in American Civil Law Jurisdictions Agustín Parise assists in identifying the transformations experienced in the legislation dealing with ownership in the Americas, thereby showing that current understandings are not uncontested dogmas.
This book is the result of research undertaken on both sides of the Atlantic, and covers the 16th to 20th centuries. Agustín Parise offers readers a journey across time and space, by studying three American civil law jurisdictions in three successive time periods. His book first highlights the added value that comparative legal historical studies may bring to Europe and the Americas. It then addresses, in chronological order, the three ownership paradigms (i.e., Allocation, Liberal, and Social Function) that he claims have developed in the Americas.
E-Book