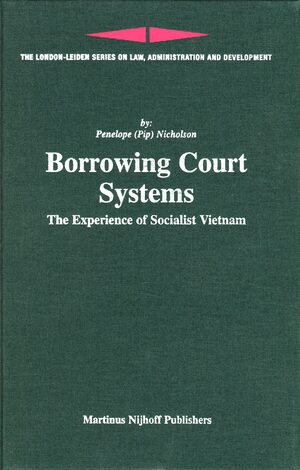 Borrowing Court Systems
The Experience of Socialist Vietnam
Series: London-Leiden Series on Law, Administration and Development, Volume: 10
Author: Penelope Nicholson
This publication is a world first: an English-language history of the Vietnamese court system (1945 to 2005). Drawing on a resurgent interest in comparative law generally and legal culture in particular, the publication tests the usefulness of legal culture to the investigation of dynamic court systems within socialist states. It argues that the Vietnamese 'borrowing'
of the Soviet system of dispute resolution did not reproduce courts Soviet-style in Vietnam. Rather, the reading of Vietnamese courts in context reveals that while the Soviet model of court system was transplanted it was remoulded to assume Vietnamese characteristics. In explaining this divergence, the publication explores why the Vietnamese court system differs from its Soviet parent and analyses the implications of this for the ever-increasing literature on legal transplantation.
Hardback