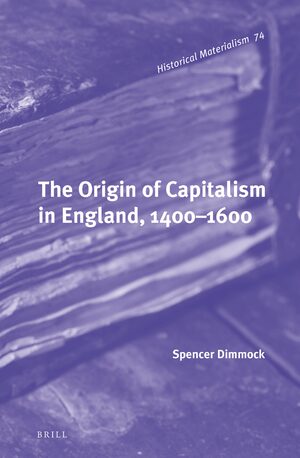 The Origin of Capitalism in England, 1400–1600
Series: Historical Materialism Book Series, Volume: 74
Author: Spencer Dimmock
Incorporating original archival research and a series of critiques of recent accounts of economic development in pre-modern England, in The Origin of Capitalism in England, 1400-1600, Spencer Dimmock has produced a challenging and multi-layered account of a historical rupture in English feudal society which led to the first sustained transition to agrarian capitalism and consequent industrial revolution.

Genuinely integrating political, social and economic themes, Spencer Dimmock views capitalism broadly as a form of society rather than narrowly as an economic system. He firmly locates its beginnings with conflicting social agencies in a closely defined historical context rather than with evolutionary and transhistorical commercial developments, and will thus stimulate a thorough reappraisal of current orthodoxies on the transition to capitalism.

4 Class Conflict and the Crisis of Feudalism
Author: Spencer Dimmock

5 Insecure Property and the Origin of Capitalism
Author: Spencer Dimmock