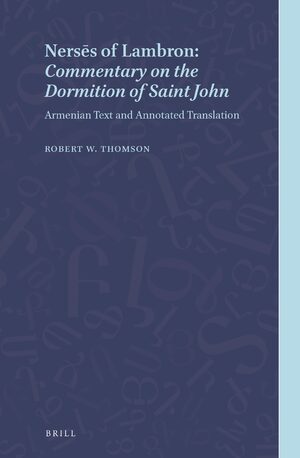 Nersēs of Lambron: Commentary on the Dormition of Saint John
Armenian Text and Annotated Translation
Series: Armenian Texts and Studies, Volume: 1
Editor: Robert W. Thomson
This is the first translation of the twelfth century Armenian commentary on the death of John the Evangelist as found in the Acts of John. The last section of the apocryphal life of the Evangelist became detached from the whole, and circulated widely in the churches of east and west. The Armenian version was included in service books, Bibles, and collections of saints’ lives. Yet no medieval commentary on that brief text is known in any other language.
Nersēs of Lambron [1153-1198], Archbishop of Tarsus, was a prolific author and an influential player in the ecclesiastical politics of his era. He used this work as a medium for spiritual reflection, and for an exposition of the Armenian tradition as opposed to the theologies of the Greek and Syrian churches.