Clear All
Download Citations
Page:1234567891011 ...
“The Book of Formation of the World”: Sefer Yetzirah and Hilkhot Yetzirah
Author: Tzahi Weiss

The Babylonian Talmud contains a tale about the creation of an artificial calf by two sages who dealt with hilkhot yetzirah, or laws of formation (b. Sanhedrin 65b). Already in the eleventh century CE the phrase “Laws of Formation” was being used to refer to the short, enigmatic, and influential treatise Sefer Yetzirah (Book of Formation), which depicts the creation of the world by means of the twenty-two letters of the Hebrew alphabet. The connection between hilkhot yetzirah and Sefer Yetzirah is of great consequence in determining the period in which the latter was edited, as well as its reception history.

One of the distinctive literary genres of Bratslav Hasidism is the shir yedidot (Song of Endearment), a mystical poem concerning the stature of the soul of R. Naḥman of Bratslav. These poems, still sung by Hasidim today, contain esoteric traditions that reveal the multiple voices within Bratslav Hasidism. This article traces the development of this form from the beginning of the nineteenth century until the present, and argues that changes in emphasis within these songs reflect shifts in Bratslav theology over the years. The study thus presents a more complex historical picture of Bratslav Hasidism, which has usually been seen as one monolithic unit.

This essay interrogates the legal discourse of Shulḥan ha-Tahor, a curious—and curiously understudied—work of Hasidic halakhah written by Rabbi Yitzḥak Ayzik Yehudah Yehiel Safrin of Komarno. The book is, at heart, a systematic reformulation of Jewish law in light of Kabbalah, Hasidism, and the quest for personal mystical experience. Shulḥan ha-Tahor offers a rare case study for the interface of mystical experience, Hasidic devotional values, and kabbalistic doctrine as they explicitly shape the codified forms—and norms—of halakhah. The essay reveals a different side of Jewish modernity through a close reading of an exceptional nineteenth-century legal code. 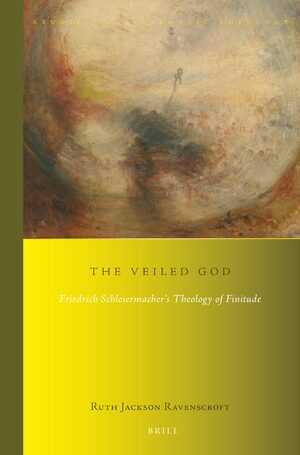 The Veiled God
Friedrich Schleiermacher’s Theology of Finitude
Series: Studies in Systematic Theology, Volume: 19
Author: Ruth Jackson Ravenscroft
In The Veiled God, Ruth Jackson Ravenscroft offers a detailed portrait of Friedrich Schleiermacher’s early life, ethics, and theology in its historical and social context. She also critically reflects on the enduring relevance of his work for the study of religion.
The book analyses major texts from Schleiermacher’s early work. It argues that his experiments with literary form convey his understanding that human knowledge is inherently social, and that religion is thoroughly linguistic and historical. The book contends that by making finitude (and not freedom) a universal aspect to human life, Schleiermacher offers rich conceptual resources for considering what it means to be human in this world, both in relations of difference to others, and in relation to the infinite.
E-Book

EUR  €59.00USD  $68.00
The “And” of History: Thinking Side by Side in Rosenzweig’s Imagination of Eternity
Author: Asher D. Biemann

Franz Rosenzweig’s Star of Redemption culminates in an aesthetic configuration of simultaneous presences: world, man, God, creation, revelation, and redemption are viewed in a metahistorical side-by-side, connected by the “factualizing power of the And.” But the idea of simultaneity, which is central to Rosenzweig’s configurative thinking, belongs to the historical imagination as much as it belongs to the theological “breaking through the shackles of time.” Rosenzweig’s “and” belongs to both a tradition of cosmic-aesthetic historicism (Meinecke) and the philosophical reconstitution of time as a simultaneous perception. In the co-presence of all historical moments, history’s hidden Gestalt, which only a people that is at once old and young can envision, connects the “and” of history with what Hegel considered history’s end—its ultimate self-recognition. Eternity, then, means neither flight from, nor resistance to, history’s naked fact, but the recognition of history’s Gestalt as an image that “does not tolerate epochs.”

Martin Buber’s View of Biblical Leadership and His View of the Eternal Thou
Author: S. Daniel Breslauer

Recent studies have renewed focus on Martin Buber’s “theopolitics” in contrast to “theological politics.” The present study expands this work by looking at what Buber meant by God. His approach to the Bible, informed by his view that “extended, the lines of relationship meet in the Eternal Thou,” illuminates his analysis of the five types of biblical leadership. That analysis, far from separating “religion” and “politics,” seemed to assume what might be designated a civil religion. The social order was integrated with religious concerns. Underneath the socio-religious surface, however, Buber discerned universal principles of relationship. Analyzing each stage in biblical leadership as Buber presented it shows how he extended the lines of historical relationships to reveal an aspect of the Eternal Thou.

In classical American pragmatism, fallibilism refers to the conception of truth as an ongoing process of improving human knowledge that is nevertheless susceptible to error. This paper traces appearances of fallibilism in Jewish thought in general, and particularly in the halakhic thought of Eliezer Berkovits. Berkovits recognizes the human condition’s persistent mutability, which he sees as characterizing the ongoing effort to interpret and apply halakhah in shifting historical and social contexts as Torat Ḥayyim. In the conclusion of the article, broader questions and observations are raised regarding Jewish tradition, fallibility, and modernity, and the interaction between Judaism and pragmatism in the history of ideas. 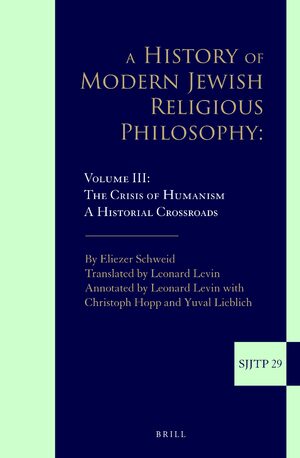 A History of Modern Jewish Religious Philosophy
Volume III: The Crisis of Humanism. A Historial Crossroads
Series: Supplements to The Journal of Jewish Thought and Philosophy, Volume: 29
Author: Eliezer Schweid
The culmination of Eliezer Schweid’s life-work as a Jewish intellectual historian, this five-volume work provides a comprehensive, interdisciplinary account of the major thinkers and movements in modern Jewish thought, in the context of general philosophy and Jewish social-political historical developments, with extensive primary source excerpts.
Volume Three, “The Crisis of Humanism,” commences with an important essay on the challenge to the humanist tradition posed in the late 19th century by historical materialism, existentialism and positivism. This is background for the constructive philosophies which sought at the same time to address the general crisis of moral value and provide a positive basis for Jewish existence. Among the thinkers presented in this volume are Moses Hess, Moritz Lazarus, Hermann Cohen (in impressive depth, with a thorough exposition of the Ethics and Religion of Reason), Ahad Ha-Am, I. J. Reines, Simon Dubnow, M. Y. Berdiczewski, the theorists of the Bund, Chaim Zhitlovsky, Nachman Syrkin, and Ber Borochov.
E-Book