This article examines a copy of Farhād Mīrzā’s Jām-i Jam (the World-Revealing Goblet) published in 1856 in Tehran and kept at Columbia University Library offsite storage. It demonstrates the dual importance of this book in geographic knowledge production and as part of the library of Saʿīd Nafīsī, one of the most prominent Iranian scholars of Persian literature. Methodologically, the paper offers various ways to study a single lithograph to decipher larger historical processes in histories of education, translation, and print. First, it analyzes the paratext to expose scholarly and political networks in order to examine the genealogy of geographic knowledge production in mid-nineteenth century Qajar Iran. Second, it studies the content and translation practices employed by Farhād Mīrzā to offer novel strategies for analyzing dissemination and reception of new ways of production and categorization of geographic knowledge as well as methods utilized in composition of pedagogical geography books. Finally, it discusses how cataloging practices affect current scholarship and lead to rendering certain texts “hidden.” It therefore illustrates how the study of Farhād Mīrzā’s Jām-i Jam, a book aspiring to reveal the world, can expose much about scholarly practices not only in the past but also the present.

On Void and the Plausibility of the Copernican Paradigm: an Indo-Persian Link in the Qajar Reception of Modern Astronomy
Authors: Trevor Brabyn and Mohammad Sadegh Ansari

Historiography on the introduction of the Copernican astronomical paradigm in Iran has acknowledged the presence of Persian treatises from India in early-nineteenth century Qajar Iran for some time. In spite of this acknowledgment, the processes by which the modern paradigm was transmitted to Iran via the subcontinent have remained shrouded in mystery for the most part. MS Or. 462 at Columbia University, Rare Book and Manuscript Library, represents a unique early nineteenth-century composite manuscript (majmūʿah), in which, alongside treatises belonging to the premodern Ptolemaic paradigm, appears an entry on the Copernican planetary system. The treatise in question, titled “The discovery of the novel opinions of the sages of Europe” (Istikshāf-i rāyhā-yi tāzah-ʾi ḥakīmān-i farang), outlines the expanding geographical knowledge of Europe as well as the cosmological revisions of Copernicus and Newton, among other unnamed European scholars. In this article, we first examine the treatise’s connection to its Indo-Persian source and present an overview of its content on the new Copernican cosmology. Furthermore, we examine an encounter between proponents and detractors of the new scientific paradigm as detailed at the end of the treatise. Finally, we draw a few conclusions about the introduction of modernity and modern science into nineteenth-century Qajar Iran, based on the information that can be retrieved from this treatise.

On Original and “Originals”: The “Copy” of the Tashkent Qurʾān Codex in the Rare Collection Books at the Butler Library
Author: Avinoam Shalem

In 1905, Dr. S. Pissareff from St. Petersburg was involved in the production of 50 copies of an earlier Qurʾān codex. The original, namely the Qurʾān codex first discovered to western gaze around the mid 19th century, held in the Khoja Akhrar mosque in Samarqand, is a large-sized Qurʾānic manuscript written in Kufic on parchment with hardly any use of punctuation or vowel marks. This codex has been traditionally regarded as the muṣḥaf of ʿUthmān b. ʿAffān, the third caliph (murdered in 656), and was said to have been brought from Iraq by Timur. This essay presents the ‘Pissareff copy’ kept at the Rare Book and Manuscript Library at Columbia University, discusses its specific status as residing in the grey zone between reproduction and copy, and aims at setting it in the larger context of ‘copies’ of Qurʾān codices.

Mathematical Philology in the Treatise on Double False Position in an Arabic Manuscript at Columbia University
Author: Alexandre M. Roberts

This article examines an Arabic mathematical manuscript at Columbia University’s Rare Book and Manuscript Library (or. 45), focusing on a previously unpublished set of texts: the treatise on the mathematical method known as Double False Position, as supplemented by Jābir ibn Ibrāhīm al-Ṣābī (tenth century?), and the commentaries by Aḥmad ibn al-Sarī (d. 548/1153–4) and Saʿd al-Dīn Asʿad ibn Saʿīd al-Hamadhānī (12th/13th century?), the latter previously unnoticed. The article sketches the contents of the manuscript, then offers an editio princeps, translation, and analysis of the treatise. It then considers how the Swiss historian of mathematics Heinrich Suter (1848–1922) read Jābir’s treatise (as contained in a different manuscript) before concluding with my own proposal for how to go about reading this mathematical text: as a witness of multiple stages of a complex textual tradition of teaching, extending, and rethinking mathematics—that is, we should read it philologically. 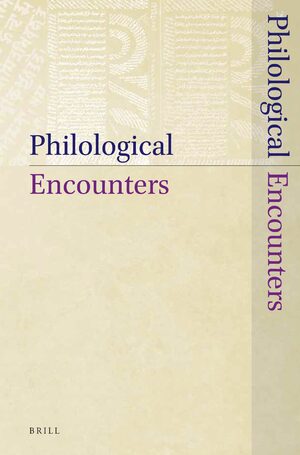