Niyanpangu-bansu: An Important Archaeological Site for the Reconstitution of the History of Caravan Trade in Northern Benin
Author: Barpougouni Mardjoua

Regarding the history of Borgu (North Benin), well-known events are the legend of Kisra, the war of Ilorin (1835-1836), and the destruction of the city named Niyanpangu. Referred to as Niyanpangu-bansu after its destruction, this archaeological site is known mostly from oral tradition and is located approximately three hundred kilometers west of Nikki (northeast Benin Republic). It has great historical significance which could contribute to our understanding of the history of caravan trade in northern Benin. This paper presents the results of the first ever archaeological research on the site in 2013 and 2014.

Urbanisation and State Formation in the Ancient Sahara and Beyond , edited by M. Sterry and D. J. Mattingly
Author: Thomas Soubira

In this paper I discuss the potential of archival research (i.e. the reassessment of pictures and drawings) for the identification of hitherto overlooked fossil footprints. All of the most important sites of the Pleistocene sequence of Melka Kunture (Upper Awash Valley, Ethiopia) showed evidence of biogenic structures that had escaped attention during the archaeological investigations which started in the 1960s. The case studies described here show that fossil footprints at Melka Kunture occur more frequently than expected. This could encourage archaeologists to be more aware of the possible presence of bioturbated layers in other archaeological contexts and plan specific research accordingly, using Melka Kunture as a reference.

Although there is no good “Oldowan” record in the Egyptian Nile Valley, the presence of the “Pebble Tools Tradition” is confirmed by surface finds, scattered in the valley and the deserts, recorded through both early and recent excavations, and confirmed by three important stratified sites at Western Thebes, Nag el Amra and Abassieh. Evidence for the existence of the Oldowan complex in Egypt was found, although there was no water corridor connecting the East African highlands to the Mediterranean, as the Proto-Nile had its sources within Egypt itself at the time of the Plio-Pleistocene boundary. The western coast of the Red Sea also should be considered a possible corridor for early Pleistocene hominins. There is still much more research to be done, especially in the Eastern Egyptian Desert and Sinai, to obtain a clearer picture of the scenario that happened during the Plio-Pleistocene episode of hominin dispersal out of Africa.

This paper examines rural Ghanaian children’s creative performance of play songs in the context of recent scholarship on children’s rights in children’s literature. This scholarship, which has focused mainly on written literature in western contexts, seeks to give serious literary attention to children’s creative expression and thereby uphold their rights to contribute to the artistic life and culture of their societies. Kasena children of northern Ghana exhibit creative agency in adapting traditional play songs to new situations, as they re-create and reinterpret communal idioms, imagery and symbols, thus generating new forms, new concepts and new meanings. I illustrate the aesthetic qualities and transgressive features of this phenomenon by drawing on relevant indigenous Kasem concepts about art and creative resistance. If taken seriously, this dynamic heritage of children’s poetry can help us see emerging play genres as an affirmation of children’s creativity, and prompt a redefinition of ideas about childhood. 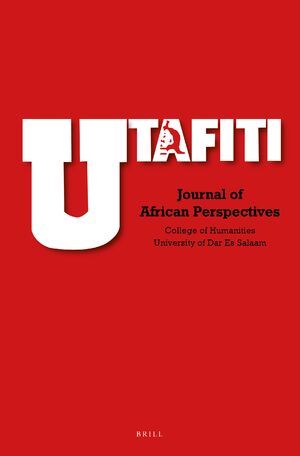 Generally one finds there are shortages in the array of technical resources available to penetrate the morphology of Kiswahili and its similarities to, as well as its departures from, morphemic structures in other Bantu languages. The introduction of a new approach employed here is an attempt to contribute to correcting that deficit. Object relative Determiner Phrases (DPs) in Kiswahili are common noun phrases with the noun head called the object relative appearing in the initial position of the DP. The phrases also have relative words and clitics introducing relative clauses. In Kiswahili these phrases are formed via DP internal movements of the object noun to the highest position coupled with movements of the subject and verb complex. The suggestion here that the object relative moves to the highest position in DP configuration marks a significant departure from other studies. This analysis provides theoretical insights about how these constructions are mapped in the minds of Kiswahili speakers. Refinement of the morpho-syntactic display which is specific to Kiswahili is essential for helping learners of the language to master it correctly. Further research will reveal whether the analysis of the object relative adopted DP can be used to derive similar phrases in other Bantu languages, such as Sesotho, Chishona, Ikalanga, and ciNsenga.