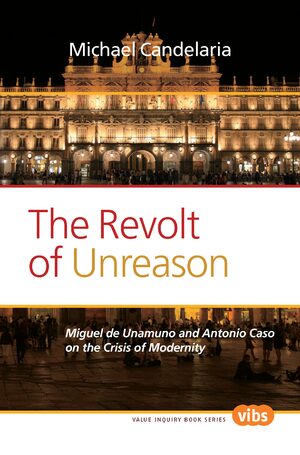 The Revolt of Unreason
Miguel de Unamuno and Antonio Caso on the Crisis of Modernity
Series: Value Inquiry Book Series, Volume: 253and Philosophy in Spain, Volume: 253
Author: Michael Candelaria
This book examines solutions to the crisis of modernity proposed by the Spanish philosopher Miguel de Unamuno and the Mexican philosopher Antonio Caso. Acceptance of the objective claims of modern scientific rationality and the consequent rejection of the objective validity of artistic, moral, and religious claims generates the crisis of modernity. The problem is that of justifying artistic, moral, and religious claims. Miguel de Unamuno in his classic work, The Tragic Sense of Life, addresses the conflict between the belief in personal immortality and modern scientific rationality. Holding that there is no rational justification for the belief in immortality, Unamuno finds a solution in a “saving scepticism” to act “as if” he deserved immortality. In his book Existence as Economy, as Art, and Charity Caso attempts to create an aposteriori metaphysics based on the “current” results of science supplemented by the intuitions of art and morality. In doing so, Caso believes that he has enlarged the scope of the knowable to include objects of art, morality, and religion. Unamuno, by accepting the strict line of demarcation between faith and reason has no other recourse but to turn to decisionism. By turning to intuitionism, Caso believes that he has blurred the line of demarcation. Decisionism and intuitionism, therefore, are worthy of further exploration.
E-Book