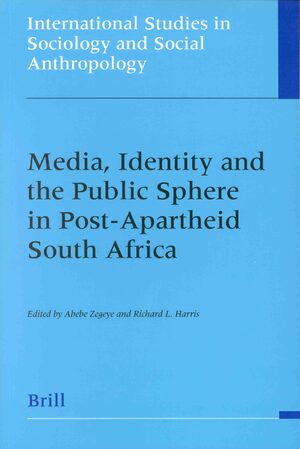 Media, Identity and the Public Sphere in Post-Apartheid South Africa
Series: International Studies in Sociology and Social Anthropology, Volume: 88
Editors: Abebe Zegeye and William V. Harris
The essays in this collection reveal that the social and political development of post-apartheid South Africa depends to an important degree on the evolving cultural, social and political identities of its diverse population and on the role of the media of mass communications in the country's new multicultural democracy. The popular struggle against the country's former apartheid regime and the on-going democratisation of South African politics have generated enormous creativity and inspiration as well as many contradictions and unfulfilled expectations. In the present period of social transformation, the legacy of the country's past is both a source of continuing conflict and tension as well as a cause for celebration and hope.
Post-apartheid South Africa provides an important case study of social transformation and how the cultural, social and political identities of a diverse population and the structure and practices of the media of mass communications affect the prospects for developing a multicultural democracy. The promise and the challenge of building a multicultural democratic society in a country with a racist and violent authoritarian legacy involves people with different identities and interests learning how to respect their differences and to live together in peace. It involves developing an inclusive or overarching common identity and a commitment to working together for a common destiny based on social equity and justice.
South Africa's media of mass communications have an important role to play in the process of unprecedented social transformation - both in developing the respect for differences and the overarching identity as well as providing the public forum and the channels of communication needed for the successful development of the country's multicultural democracy. In South Africa, the democratization of the media must go hand in hand with the democratization of the political system in order to ensure that the majority of the citizenry participate effectively in the country's multicultural democracy. Topics covered include The "Struggle for African Identity: Thabo Mbeki's African Renaissance", "Between the Local and the Global: South African Languages and the Internet", "Shooting the East/Veils and Masks: Uncovering Orientalism in South African Media" and "Black and White in Ink: Discourses of Resistance in South African Cartooning".