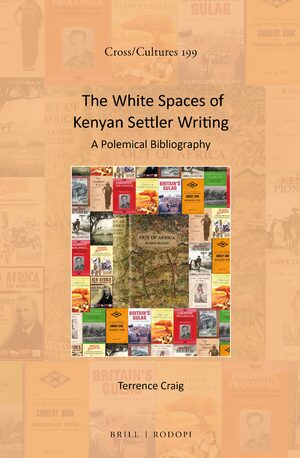 The White Spaces of Kenyan Settler Writing
A Polemical Bibliography
Series: Cross/Cultures, Volume: 199
Author: Terrence L. Craig
The White Spaces of Kenyan Settler Writing provides an overview of Kenyan literature by white writers in the half-century before Independence in 1964. Such literature has been over-shadowed by that of black writers to the point of critical ostracism. It deserves attention for its own sake, as the expression of a community that hoped for permanence but suffered both disappointment and dispossession. It deserves attention for its articulation of an increasingly desperate colonial and Imperial situation at a time when both were being attacked and abandoned in Africa, as in other colonies elsewhere, and when a counter-discourse was being constructed by writers in Britain as well as in Africa. Kenya was likely the best-known twentieth-century colony, for it attracted publicity for its iconic safaris and its Happy Valley scandals. Yet behind such scenes were settlers who had taken over lands from the native peoples and who were trying to make a future for themselves, based on the labour, willing or forced, of those people. This situation can be seen as a microcosm of one colonial exercise, and can illuminate the historical tensions of such times. The bibliography is an attempt to collect the literary resources of white Kenya in this historically significant period.
E-Book (PDF)