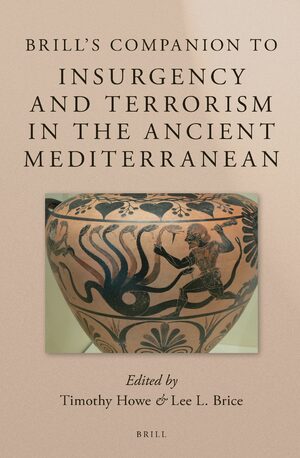 Brill's Companion to Insurgency and Terrorism in the Ancient Mediterranean

Editors: Timothy Howe and Lee L. Brice
In Brill's Companion to Insurgency and Terrorism in the Ancient Mediterranean, Tim Howe and Lee Brice challenge the view that these forms of conflict are specifically modern phenomena by offering an historical perspective that exposes readers to the ways insurgency movements and terror tactics were common elements of conflict in antiquity. Assembling original research on insurgency and terrorism in various regions including, the Ancient Near East, Greece, Central Asia, Persia, Egypt, Judea, and the Roman Empire, they provide a deep historical context for understanding these terms, demonstrate the usefulness of insurgency and terrorism as concepts for analysing ancient Mediterranean behavior, and point the way toward future research.
E-Book (PDF)

€138.00$184.00
​
Add to Cart
Lee L. Brice, Ph.D. (2003), UNC-Chapel Hill, is Professor of History at Western Illinois University. He has published volumes and articles/chapters on the military history of the ancient world and is series editor of Warfare in the Ancient Mediterranean World (Brill).

Timothy Howe studied History, Classical and Archaeology at The Pennsylvania State University. PhD. 2000. He has been at St. Olaf College since 2003, where he is currently Associate Professor of History & Ancient Studies. Since 2013 he has excavated at the Hellenistic/Roman site of Antiochia ad Cragum in Southern Turkey, where he is currently Associate Field Director. Main interests include Greek and Roman agriculture and warfare, Mediterranean archaeology and Alexander the Great. He has written two monographs ( Pastoral Politics: Animals, Agriculture and Society in Ancient Greece, Regina 2008 and All Things Alexander the Great, Greenwood 2016).
"The authors had to deal with another difficulty: the availability and inadequacy of sources [...] The way in which the authors have dealt with and overcome this problems, is one of the strenghts of this companion. [...] Beginning a series entitled 'Warfare in the Ancient Mediterranean World' with a companion dedicated to insurgency and terrorism is a courageous and surprising choice. The reader expects a history of war, but instead finds within the different faces of war in history. We eagerly await the second volume."
Immaculato Eramo in Revue internationale d'histoire militaire ancienne (2017.5)

"The best contributions combine shrewd interdisciplinary thinking with rigorous, traditional historical research, adopting the language and conceptual models of the social and military sciences, while not allowing tidy theories to blind them to the complexities of ancient evidence [...] Brill’s Companion to Insurgency and Terrorism in the Ancient Mediterranean [...] stakes a bold methodological claim, demonstrating that historical interpretations of the past can and should be shaped by insights from related disciplines. To turn modern lenses on ancient evidence can produce instructive results."
Gabriel Moss in BMCR 2017.12.06
Table of Contents
Series Foreword
Lee L. Brice
Preface
Timothy Howe
Abbreviations
List of Contributors

Readers interested in the history of insurgency, counterinsurgency, terrorism, peace-keeping, social movements and warfare in the ancient Mediterranean, including the Mesopotamia, Greece, Persia, Egypt, Judea, and the Roman Empire.