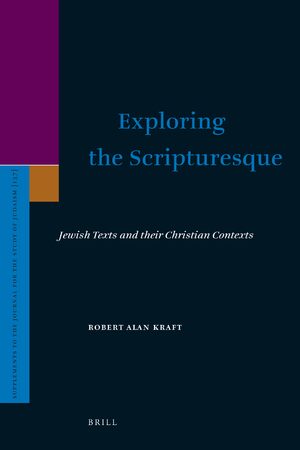 Exploring the Scripturesque
Jewish Texts and their Christian Contexts
Series: Supplements to the Journal for the Study of Judaism, Volume: 137
Author: Robert Alan Kraft
These essays span about a third of a century and include both previously published and some unpublished studies by Robert A. Kraft which focus on interfaces between Jewish materials and the worlds in which they were transmitted and/or perceived, especially Christian contexts. The initial section on general context and methodology is followed by several detailed studies by way of example. The final section touches on some related issues involving Philonic and other texts. The primary concern is with "scripturesque" materials and traditions, whether they later became canonical or not, that seem to have been respected as “scriptural” by some individuals or communities in the period prior to (or apart from) the development of an exclusivistic canonical consciousness in some Jewish and Christian circles.
E-Book