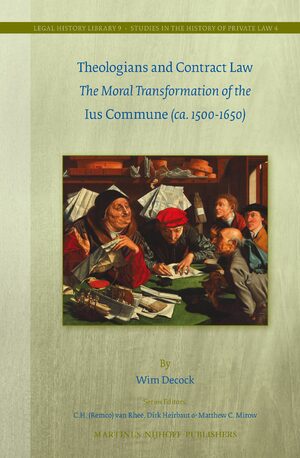 Theologians and Contract Law
The Moral Transformation of the Ius Commune (ca. 1500-1650)
Series: Studies in the History of Private Law, Volume: 9/4and Legal History Library, Volume: 9/4
Author: Wim Decock
The Roman legal tradition is the ancestor of modern contract law but there is no agreement as to how and when a general law of contract emerged. Wim Decock’s thesis is that an important step in this evolution was taken by theologians in the sixteenth and seventeenth centuries. They transformed the Roman legal tradition (ius commune) by insisting on the moral foundations of contract law. Theologians emphasized that the enforceability of contracts is based on voluntary consent and that a contract should not enrich one party at another's expense. While their main concern was the salvation of souls, theologians played a key role in the development of a systematic contract law in which the founding principles were freedom and fairness.