Clear All Modify Search
Download Citations
Annexation and the Unhappy Valley
The Historical Anthropology of Sindh’s Colonization
Series: European Expansion and Indigenous Response, Volume: 19
Author: Matthew A. Cook
Annexation and the Unhappy Valley: The Historical Anthropology of Sindh’s Colonization addresses the nineteenth century expansion and consolidation of British colonial power in the Sindh region of South Asia. It adopts an interdisciplinary approach and employs a fine-grained, nuanced and situated reading of multiple agents and their actions. It explores how the political and administrative incorporation of territory (i.e., annexation) by East India Company informs the conversion of intra-cultural distinctions into socio-historical conflicts among the colonized and colonizers. The book focuses on colonial direct rule, rather than the more commonly studied indirect rule, of South Asia. It socio-culturally explores how agents, perspectives and intentions vary—both within and across regions—to impact the actions and structures of colonial governance.
E-Book (PDF) 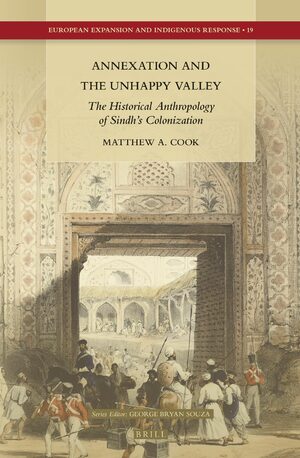