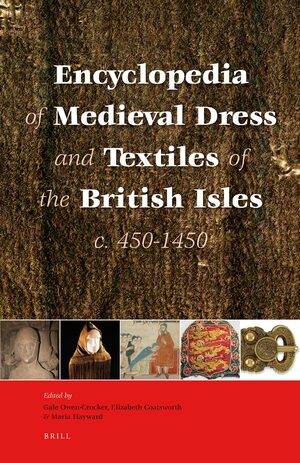 Encyclopedia of Medieval Dress and Textiles of the British Isles, c. 450-1450
Editors: Owen-Crocker Gale, Elizabeth Coatsworth and Maria Hayward
The single volume Encyclopedia of Medieval Dress and Textiles of the British Isles c. 450-1450 is a unique work that intends to bring together in 582 signed articles the latest research from across the range of disciplines which contribute to our knowledge of medieval dress and textiles.
There has been a long-standing interest in the subject, which has recently manifested itself in a flowering of research and publications, including activities by the editors of the Encyclopedia: the foundation of DISTAFF (Discussion, Interpretation and Study of Textile Arts, Fabrics and Fashion) as an umbrella organization for the presentation of papers at the major medieval congresses in Kalamazoo and Leeds (Netherton and Owen-Crocker); the establishment of the annual journal Medieval Clothing and Textiles (Netherton and Owen-Crocker); the Manchester Medieval Textiles Project (Coatsworth and Owen-Crocker); and the AHRC Lexis of Cloth and Clothing Project (Owen-Crocker and Sylvester).
There is a clear need for an interdisciplinary reference work which will introduce readers to various sources of evidence, and give clear information about the most recent discoveries and interpretations and bibliographical guidance to readers. The Encyclopedia of Medieval Dress and Textiles of the British Isles c. 450-1450 contains also over 100 plates and diagrams to illustrate the text.
Free sample fascicle available.
Also available online as part of Brill's Medieval Reference Library Online.

Features
• Covers materials, techniques and styles, and their changes.
• Focuses on the British Isles, but considers comparative material from elsewhere and includes some illustrations taken from continental manuscripts.
• Covers secular, ecclesiastical and military dress, its changes over time and the concept of fashion, surviving examples and the names of individual garments and their parts
• Investigates techniques of manufacture, the people who produced the goods and the equipment they used.
• Looks at weights and measures, trade, guilds, tools, spinning, weaving and stitches.
• Examines the sources, archaeological, documentary and artistic.
• Considers non-literary documentary sources in articles on wills and inventories, estate management and the Paston Letters, wardrobe accounts
• Looks at the treatment of dress and textiles in poetry: riddles, heroic literature and Romance, and poets: Chaucer, Gower, Lydgate, The Pearl Poet, Charles d’Orleans (Fortune Stabilnes) and King James I of Scotland (The Kingis Quair).
• Considers: manuscript illumination, stone and wood carving, brass engraving and stained glass as examples.
• Includes alternative titles and spellings of medieval words and articles on the naming of cloths and garments, and on surnames and place names derived from cloth production.
• Looks at subjects such as cross-dressing; the origin and significance of liturgical colours; the use and significance of gemstones, amber and pearls; the importance of textiles in funerals; horse equipment, tents, ships and the transport of goods; the role of patronage; civil and ecclesiastical prohibitions and rights; religious morality and political philosophy relating to dress; shopping; ingredients and practice for finishing and laundering cloth; and the use of medieval dress and textiles in the present day for Living History (re-enactment and reconstruction).
Hardback