Truth, Reconciliation, and Evil
Series: At the Interface / Probing the Boundaries, Volume: 19
Editor: Margaret Sönser Breen
Truth, Reconciliation, and Evil analyses evil in a variety of forms—as an unspeakable crime, a discursive or narrative force, a political byproduct, and an inevitable feature of warfare. The collection considers the forms of loss that the workings of evil exact, from the large-scale horror of genocide to the individual grief of a self-destructive homelessness. Finally, taken together, the fourteen essays that comprise this volume affirm that the undoing of evil—the moving beyond it through forgiveness and reconciliation—needs to occur within the context of community broadly defined, wherein individuals and groups can see beyond themselves and recognise in others a shared humanity and common cause.
Truth, Reconciliation, and Evil consists of expanded versions of papers presented at the Fourth International Conference on Evil and Wickedness, held in Prague in March 2003. The essays represent a variety of disciplinary approaches, including those of anthropology, linguistics, literature, philosophy, and psychoanalysis.
Paperback 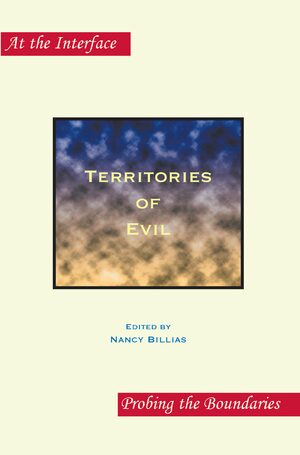 Territories of Evil
Series: At the Interface / Probing the Boundaries, Volume: 45
Editor: Nancy Billias
Evil is not only an abstract concept to be analyzed intellectually, but a concrete reality that we all experience and wrestle with on an ongoing basis. To truly understand evil we must always approach it from both angles: the intellective and the phenomenological. This same assertion resounds through each of the papers in this volume, in which an interdisciplinary and international group (including nurses, psychologists, philosophers, professors of literature, history, computer studies, and all sorts of social science) presented papers on cannibalism, the Holocaust, terrorism, physical and emotional abuse, virtual and actual violence, and depravity in a variety of media, from film to literature to animé to the Internet. Conference participants discussed villains and victims, dictators and anti-heroes, from 921 AD to the present, and considered the future of evil from a number of theoretical perspectives. Personal encounters with evil were described and analyzed, from interviews with political leaders to the problems of locating and destroying land mines in previous war zones. The theme of responsibility and thinking for the future is very much at the heart of these papers: how to approach evil as a question to be explored, critiqued, interrogated, reflected upon, owned. The authors urge an attitude of openness to new interpretations, new perspectives, new understanding. This may not be a comfortable process; it may in fact be quite disturbing. But ultimately, it may be the only way forward towards a truly ethical response. The papers in this collection provide a wealth of food for thought on this most important question.
E-Book

Hermann Hesse Today / Hermann Hesse Heute
Series: Amsterdamer Beiträge zur neueren Germanistik, Volume: 58and Amsterdamer Beiträge zur neueren Germanistik, Volume: 58
Editors: Ingo Cornils and Osman Durrani
In November 2002, an international conference was held at the Institute of Germanic Studies in London in order to commemorate the 125th anniversary of Hermann Hesse’s birth. Twenty distinguished speakers from North and South America, Russia, Switzerland, Germany and the United Kingdom attended the three-day conference with the specific aim of exploring the continuing importance of this widely read German-language author.
This volume brings together the various responses to the complex challenge that Hesse, whose sheer success is sometimes seen as detracting from his status, presents to literary scholarship around the world. The author’s current image among readers and scholars is approached from several distinct thematic and theoretical perspectives, with the objective of providing a concise overview of current research. The volume offers new readings of a number of Hesse’s seminal works and makes a significant contribution to academic research into his past and present standing as a global icon.
As the title suggests, the focus is on ‘Hermann Hesse Today’. The book investigates his current significance for a modern readership, taking account of his importance in the lecture theatre and classroom, the multi-facetted applicability of his moral, ethical and aesthetic concerns in the context of a fragmented world, and the continuing relevance of his writings. With the ever-increasing importance of modern preoccupations such as the ecological movement or the growth of the internet, a fresh look at Hesse’s works is long overdue. The most obvious sign of this is the appearance of a definitive, historical-critical edition of his works (prose, poetry, and literary criticism), which will give access to much hitherto unpublished material and stimulate fresh debates on an author who ranks among the best-known and most influential figures of the twentieth century.
This volume will be of interest to teachers of German in higher education and their students as well as researchers and the general readership that continues to take an interest in Hesse on both sides of the Atlantic.
E-Book

And the Birds Began to Sing
Religion en Literature in Post-Colonial Cultures
Series: Cross/Cultures, Volume: 22
Editor: Jamie S. Scott
Taking as its starting-point the ambiguous heritage left by the British Empire to its former colonies, dominions and possessions, And the Birds Began to Sing marks a new departure in the interdisciplinary study of religion and literature. Gathered under the rubric Christianity and Colonialism, essays on Brian Moore. Timothy Findley, Margaret Atwood and Marian Engel, Thomas King, Les A. Murray, David Malouf, Mudrooroo and Philip McLaren, R.A.K. Mason, Maurice Gee, Keri Hulme, Epeli Hau'ofa, J.M. Coetzee, Christopher Okigbo, Chinua Achebe, Amos Tutuola and Ngugi wa Thiong'o explore literary portrayals of the effects of British Christianity upon settler and native cultures in Northern Ireland, Canada, Australia, New Zealand and the South Pacific, and the Africas. These essays share a sense of the dominant presence of Christianity as an inherited system of religious thought and practice to be adapted to changing post-colonial conditions or to be resisted as the lingering ideology of colonial times. In the second section of the collection, Empire and World Religions, essays on Paule Marshall and George Lamming, Jean Rhys, Olive Senior and Caribbean poetry, V.S. Naipaul, Anita Desai, Kamala Markandaya, and Bharati Mukherjee interrogate literature exploring relations between the scions of British imperialism and religious traditions other than Christianity. Expressly concerned with literary embodiments of belief-systems in post-colonial cultures (particularly West African religions in the Caribbean and Hinduism on the Indian subcontinent), these essays also share a sense of Christianity as the pervasive presence of an ideological rhetoric among the economic, social and political dimensions of imperialism. In a polemical Afterword, the editor argues that modes of reading religion and literature in post-colonial cultures are characterised by a theodical preoccupation with a praxis of equity.
Hardback