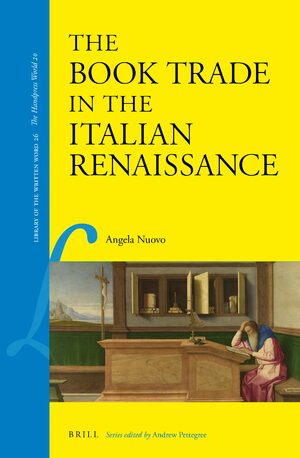 The Book Trade in the Italian Renaissance
Series: Library of the Written Word, Volume: 26and Library of the Written Word - The Handpress World, Volume: 26
Author: Angela Nuovo
This work offers the first English-language survey of the book industry in Renaissance Italy. Whereas traditional accounts of the book in the Renaissance celebrate authors and literary achievement, this study examines the nuts and bolts of a rapidly expanding trade that built on existing economic practices while developing new mechanisms in response to political and religious realities. Approaching the book trade from the perspective of its publishers and booksellers, this archive-based account ranges across family ambitions and warehouse fires to publishers' petitions and convivial bookshop conversation. In the process it constructs a nuanced picture of trading networks, production, and the distribution and sale of printed books, a profitable but capricious commodity.

Originally published in Italian as Il commercio librario nell’Italia del Rinascimento (Milan: Franco Angeli, 1998; second, revised ed., 2003), this present English translation has not only been updated but has also been deeply revised and augmented.
E-Book