Tout effacer Modify Search
Download Citations
The Institution of the Hasmonean High Priesthood
Series: Supplements to the Journal for the Study of Judaism, Volume: 165
Auteur : Vasile Babota
In The Institution of the Hasmonean High Priesthood, Vasile Babota offers an interdisciplinary study of the establishment of the Hasmonean priests as high priests in Jerusalem, from their revolt in 167 down to 140. The Hasmonean high priests exercised both religious and civil powers until 37 B.C.E. and some acted also as kings. Previous studies looked at them mainly from a biblical /Jewish perspective. Vasile Babota persuasively argues that the first high priests Jonathan and Simon acted as Hellenistic high priestly rulers. This conclusion is based on an analysis of the activity of the high priests Jonathan and Simon on internal and external levels, a comparison with earlier Jewish high priests, and a comparison with Hellenistic (Seleucid and Ptolemaic) high priests.
E-Book (PDF) 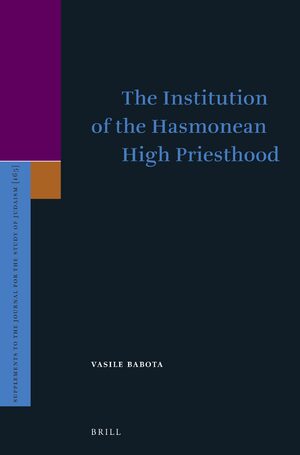