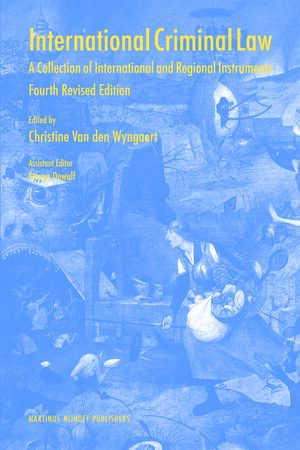 International Criminal Law
A Collection of International and Regional Instruments. Fourth Revised Edition
Editors: Christine van den Wyngaert and Steven Dewulf
International Criminal Law has become a mainstream subject. While it was hardly taught at law faculties at the time of the first edition of this book (1996), it is now highly featured in academic curricula. Practitioners, academics and political decision makers are increasingly confronted with this discipline.
Within the framework of the United Nations and the European Union, but also in other regional bodies, there has been a dramatic increase in the conventions on various aspects of international criminal law. In fact much of the day-to-day work of lawyers around the globe is about the subject. International criminal law is gradually supple-menting human rights as the standard to assess governments and individuals. In the process, it has become part of the vocabulary of the general public. Many recent crisis situations have contributed to this phenomenon, from 11/9 and the wars in Afghanistan and Iraq to the Arab spring and SC Resolution 1973 (2011) giving effect to R2P in Libya.
International criminal courts, which until some time ago, were still somewhat exotic, are now part of the mainstream international judicial establishment. The UN ad hoc tribunals together with the mixed tribunals and special courts have substantially con-tributed to the development of international criminal jurisprudence. Meanwhile the International Criminal Court is in full operation, delivering its first landmark decisions and dealing with an increasing number of situations and cases.
In the European Union, the Lisbon Treaty is representing an important step towards the growing integration in the field of criminal law and procedure. A comparable trend is incipient in many other regions and organisations.
This collection is meant to guide students and practitioners through the labyrinth of international criminal law instruments. It comprises international (universal) and Euro-pean conventions, while also including other regional instruments (AU/OAU, ASEAN, the Commonwealth, OAS and SAARC).