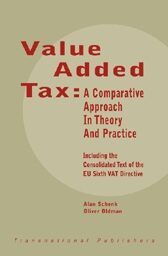 Value Added Tax: A Comparative Approach in Theory and Practice
Authors: Alan Schenk and Oliver Oldman
This comparative examination of Value Added Taxes worldwide covers both theory and practice and is intended for an audience of students, teachers, researchers, government officials, and practitioners. The authors are American law professors, both teachers of courses on VAT and long time members of the ABA's Committee on Value Added Tax (recently the Committee on Alternative Tax Systems).

The book begins with an extensive survey of VAT principles as enunciated during the second half of the twentieth century in official reports and by economists and other tax authorities. Included are basic statistical data and an appendix delineating the global spread of the tax together with rates in the year 2000. Thereafter, the authors present the legal concepts and definitions displayed in VAT laws and elaborated by the courts of Europe and New Zealand. Comparison is made from time to time with American experience with state retail sales taxes. Application of VATs to particular activities is examined in separate chapters devoted to banking, insurance, real estate, and nonprofit organizations. Particular attention is paid to cross-border situations whether international, within the European Union and other country groupings, or within federal countries. The special problems of telecommunications, transportation and E-commerce are covered together in one chapter.

A feature of the book of particular use to practitioners as well as students and scholars is an appendix of more than 100 pages, which sets forth the consolidated text of the European Union's famous Sixth Directive. It serves as the governing statutory document for the VATs in EU member countries and is the subject of interpretation and application in many of the litigated cases included or referred to in the book. 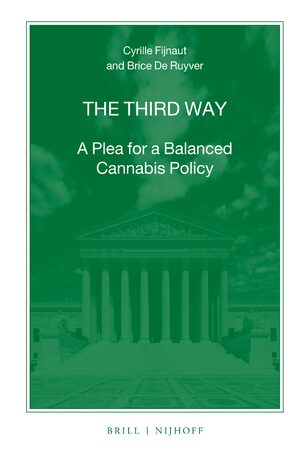 The Third Way
A Plea for a Balanced Cannabis Policy
Series: Nijhoff Law Specials, Volume: 87
Authors: Cyrille J.C.F. Fijnaut and Brice de Ruyver
What is sensible when it comes to developing and implementing a policy with regard to products which in the case of regular use are harmful, but which at the same time exert a strong attraction, even so strong that people (may) become dependent on or addicted to them? This question relates to many illicit drugs, but these days it is, both nationally and internationally, mainly related to the policy regarding the production, distribution and consumption of cannabis. Generally speaking, the legalization of cannabis in Uruguay and in some states of the United States of America, in particular Colorado and Washington State, has given a powerful impetus to the discussion about the cannabis policy. In the Netherlands, that discussion has become increasingly relevant over the past years because of the struggle of coffeeshop owners and political parties. This volume offers the first English-language analysis of the situation in the Netherlands in order to make a contribution to the international debate on this heated topic. Since the 1960s, the Dutch cannabis policy has been an important point of reference in the international discussion about the policy that should be pursued regarding the use of cannabis. However, in international and foreign literature about cannabis policy the developments in the Netherlands are often depicted in an incomplete or one-sided manner, which has a negative impact on the quality of the international debate about what has happened and what should happen now. This volume seeks to redress that imbalance.
eBook