In Russia, trust management (doveritel'noe upravlenie) is a civil-law institution regulated by the 1994 Russian Civil Code (Chap.53). There has been no small amount of criticism by Russian scholars of the trust doctrine. In part, this is a function of the fact that trust management of property in Russia has common-law roots, based on the fundamental principles of trust. Furthermore, trust management differs from the (Soviet) concepts of 'economic ownership' (khoziaistvennoe vedenie) and 'administrative (operative) management' (operativnoe upravlenie), on the one hand, and from the classic common-law form of trust, on the other. The transplant of foreign experience into Russia has had an influence on the restructuring of the Russian economy as a result of the intent of Russian legislators to introduce legal institutions that work in other legal systems embedded in market economies. In political terms, this has led to a legal model of trust management of property in Russian legislation that is a competitive and alternative legal model to the right of economic ownership and operative management. These latter two constructs traditionally enjoyed exclusive and absolute domination in the sphere of managing state property in the administrative-command economic system in the Soviet Union, and still predominate in Russia today.

Celebrating a Star in the Legal Firmament of Russia: The CXXV Anniversary of the Birth of Academician A.V. Venediktov
著者： Zlata E. Benevolenskaya

The New Political Polarization of the World and the Reform of State Property Management in Russia
著者： Zlata E. Benevolenskaya 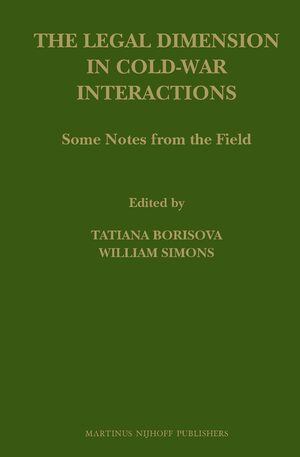 in The Legal Dimension in Cold-War Interactions