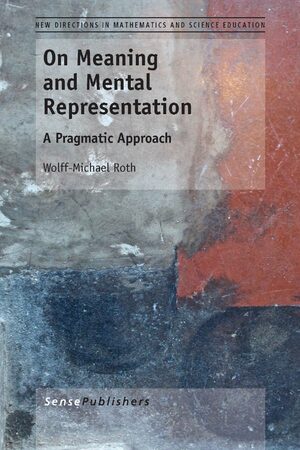 On Meaning and Mental Representation
A Pragmatic Approach
Series: New Directions in Mathematics and Science Education, Volume: 26
Author: Wolff-Michael Roth
This book is about language in STEM research and about how it is thought about: as something that somehow refers to something else not directly accessible, often «meaning», «mental representation», or «conception». Using the analyses of real data and analyses of the way certain concepts are used in the scientific literature, such as “meaning,” this book reframes the discussion about «meaning», «mental representation», and «conceptions» consistent with the pragmatic approaches that we have become familiar with through the works of K. Marx, L. S. Vygotsky, M. M. Bakhtin, V. N. Vološinov, L. Wittgenstein, F. Mikhailov, R. Rorty, and J. Derrida, to name but a few. All of these scholars, in one or another way, articulate a critique of a view of language that has been developed in a metaphysical approach from Plato through Kant and modern constructivism; this view of language, which already for Wittgenstein was an outmoded view in the middle of the last century, continuous to be alive today and dominating the way language is thought about and theorized.
E-Book

Scientific & Mathematical Bodies
The Interface of Culture and Mind
Series: New Directions in Mathematics and Science Education, Volume: 22
Authors: SungWon Hwang and Wolff-Michael Roth
This book is about the sensuous, living body without which individual knowing and learning is impossible. It is the interface between the individual and culture. Recent scholarship has moved from investigated knowing and learning as something in the mind or brain to understanding these phenomena in terms of the body (embodiment literature) or culture (social constructivism). These two literatures have expanded the understanding of cognition to include the role of the body in shaping the mind and to recognize the tight relation between mind and culture. However, there are numerous problems arising from ways in which the body and culture are thought in these separate research domains. In this book, the authors present an interdisciplinary, scientific initiative that brings together the concerns for body and for culture to develop a single theory of cognition centered on the living and lived body. This book thereby contributes to bridging the gap that currently exists between theory (knowing that) and praxis (knowing how) that is apparent in the existing science and mathematics education literatures.
E-Book