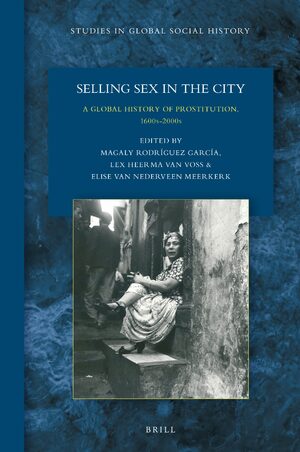 Selling Sex in the City: A Global History of Prostitution, 1600s-2000s
Reihe: Studies in Global Social History, Band: 31
HerausgeberInnen: Magaly Rodríguez García, Lex Heerma van Voss und Elise van Nederveen Meerkerk
Selling Sex in the City offers a worldwide analysis of prostitution that takes a long historical approach which covers a time period from 1600 to the 2000s. The overviews in this volume examine sex work in more than twenty notorious “sin cities” around the world, ranging from Sydney to Singapore and from Casablanca to Chicago. Situated within a comparative framework of local developments, the book takes up themes such as labour relations, coercion, agency, gender, and living and working conditions. Selling Sex in the City thus reveals how prostitution and societal reactions to the trade have been influenced by colonization, industrialization, urbanization, the rise of nation states, imperialism, and war, as well as by revolutions in politics, transport, and communication.