The introductory chapter names the general question the book will engage (How do people become able to realize ethical ideals?) and the specific text it will study (the Gospel of Matthew from the New Testament). It explains that the work will focus on Matthew because while that gospel is widely considered ethically formative, descriptions of how it is formative remain vague and that, to offer a more precise description of how Matthew portrays ethical formation, it will examine the gospel’s depiction of regimented practices, specifically its depiction of the function of the sayings collection that constitutes chapters 5–7, the Sermon on the Mount. 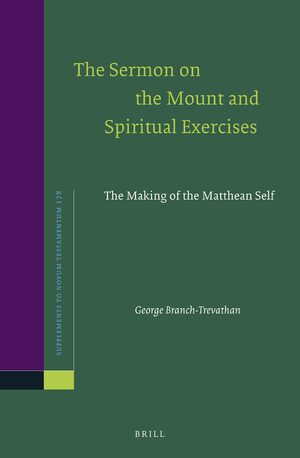 Chapters three, four, and five argue that evidence comparable to that for the Kyriai Doxai and the Encheiridion exists for Matt 5–7 and that therefore it is reasonable to conclude that Matthew portrays the Sermon on the Mount as the basis for spiritual exercises intended to transform practitioners into the moral ideal articulated in Matthew’s gospel. Chapters three and four describe Matthew’s character ethic, or ideal self, chapter three by tracing this gospel’s use of the metaphor of trees and their fruits for the source of conduct and conduct itself and showing that particular inward traits and states make right actions possible and that right intentions must accompany those actions.

Chapter two presents the evidence that leads many scholars of antiquity to conclude that some ancient sayings collections formed the basis for practices intended to transform practitioners into particular ethical ideals, for what the historian of philosophy Pierre Hadot calls “spiritual exercises.” It examines Epicurus’ Kyriai Doxai and Epictetus’ Encheiridion, both widely considered the bases for such exercises, to discern how one might know that a particular gnomic work is an instrument intended for use in transformative work on oneself. It describes Epicurus’ ideal self and then show that his Kyriai Doxai restates that ideal in gnomic form and that further evidence internal to the work and external to it (e.g., Epicurus’ other writings as well as testimonia about the Kyriai Doxai) indicates that it facilitates a spiritual exercise that enables one to become that idealized self. It shows the same for Epictetus and the Encheiridion.

Chapter four examines Matthew’s treatment of purity in 15:1–20, eschatological preparation and judgment in chs. 24–5, and hypocrisy throughout the gospel and finds in these passages the same ethic that animated the metaphor of trees and their fruits studied in chapter three. Together chapters three and four show that Matthew’s narrative idealizes the person who is humble enough to repent and, in turn, become Jesus’ disciple and who maintains the imperturbability and perspective necessary to persist in doing the good deeds God wills and will repay and the right intentions required to make those deeds truly good. They show that Matthew idealizes proper interiority.

Chapter 5 The Sermon on the Mount as the Basis of a Spiritual Exercise
Author: George Branch-Trevathan

Chapter five then identifies evidence internal and external to the Sermon on the Mount—evidence comparable to that presented for the Kyriai Doxai and the Encheiridion—that Matthew portrays it as the basis for an exercise that enables one to become the self that Matthew idealizes. First, it demonstrates that Matt 5–7 presents in gnomic form the moral norm featured throughout the gospel, the demand for proper interiority. Second, it argues that the SM’s conclusion in 7:24–7 indicates its intended function, namely to prompt exercises of reflection, or meditation, on the contents of chs. 5–7 as well exercises of attention, or, self-scrutiny. Third, it maintains that the notion that Matthew would present the Sermon on the Mount as the basis for transformative work on the self coheres with the evangelist’s depiction of moral progress and of Jesus as Wisdom.

Chapter six, the conclusion, summarizes the results of chapters one through five and presents the study’s implications for our understanding of Matthew’s ethics, the history of self-transformation in antiquity, and the study of ethics more generally.

Why Does 4Q394 Begin with a Calendar?
Author: George Branch-Trevathan 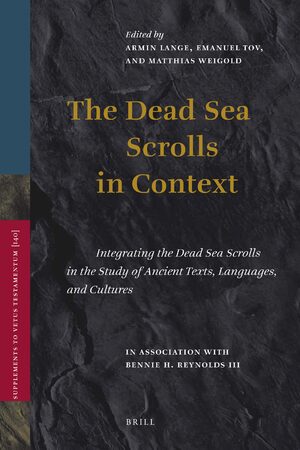