Répertoire mondial des crustacés copépodes des eaux intérieures 3. Harpacticoïdes
Series: Crustaceana, Supplements, Volume: 16
Authors: Dussart and Defaye
As knowledge of inland water Copepoda Crustacea of the world becomes more refined, revisions of taxonomic groups have sometimes lead to major modifications in defining the species and genera.
New criteria and fixed microcharacters are also used.
In order to make better use of the old works and to reduce the "currents" errors to a minimum, a catalogue of the presently known species and subspecies was clearly needed.
The authors previously attempted an approach of this type regarding freshwater Calanoids (1983) and Cyclopoids (1985). In this volume they present the Harpacticoid group which is the last of those studied in inland waters of the world.
This catalogue is considered up to date as of December 1987.
Paperback 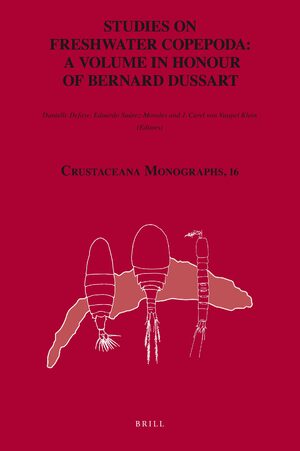 Studies on Freshwater Copepoda: a Volume in Honour of Bernard Dussart
Series: Crustaceana Monographs, Volume: 16
Editors: Danielle Defaye, Eduardo Suarez-Morales and J.C. von Vaupel Klein
The influence of Bernard Dussart's contributions to limnology in general as well as to freshwater copepodology in particular can hardly be overestimated. From 1945 until his decease late 2008, he has devoted more than 60 years of his life to studying freshwater bodies and their inhabitants. Next to his 200+ scientific papers, his frequent travels brought him all over the world, where he invariably left an inheritage of enhanced interest in problems of freshwater biology and management. The contributions in this book show the progress of research on the Copepoda found in continental waters and in part continue along the lines B. Dussart has set out: a worthy tribute to one of the very nestors of copepodology of fresh waters.
E-Book