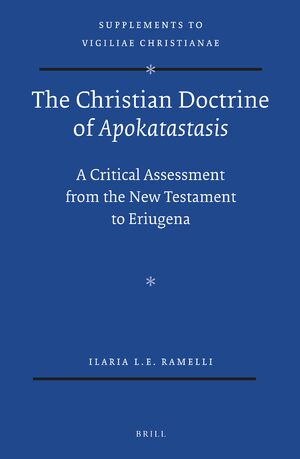 The Christian Doctrine of Apokatastasis
A Critical Assessment from the New Testament to Eriugena
Series: Vigiliae Christianae, Supplements, Volume: 120
Author: Ilaria Ramelli
The theory of apokatastasis (restoration), most famously defended by the Alexandrian exegete, philosopher and theologian Origen, has its roots in both Greek philosophy and Jewish-Christian Scriptures and literature, and became a major theologico-soteriological doctrine in patristics. This monograph—the first comprehensive, systematic scholarly study of the history of the Christian apokatastasis doctrine—argues its presence and Christological and Biblical foundation in numerous Christian thinkers, including Syriac, and analyses its origins, meaning, and development over eight centuries, from the New Testament to Eriugena, the last patristic philosopher. Surprises await readers of this book, which results from fifteen years of research. For instance, they will discover that even Augustine, in his anti-Manichaean phase, supported the theory of universal restoration.
E-Book