Isaac Arama (1420–1494), the most influential preacher in the generation of the expulsion from Spain, attempted a balance between what he considered a foreign Greek body of rational knowledge on the one hand, and a supra-rational revealed knowledge native to Judaism’s prophetic tradition on the other. This article focuses on an aspect of his creative exegesis and in particular his engagement with Maimonides that was powerful enough, in addition to other historical factors of course, to close the chapter on Jewish philosophical exegesis which Maimonides spearheaded. Often, his own exegesis is pointedly constructed to subvert Maimonides’ own exegesis and thus offer an alternative direction for biblical commentary that mediates between the rigor of philosophical reasoning, or the authority of the mind, and the existential faith commitment to revelation, or the authority of God. 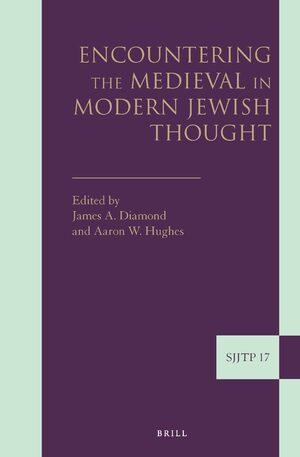 Encountering the Medieval in Modern Jewish Thought
Series: Supplements to The Journal of Jewish Thought and Philosophy, Volume: 17
Editors: James A. Diamond and Aaron W. Hughes
The term “medieval” performs a great deal more intellectual work in modern Jewish Thought than simply acting as a referent to a particular historical era. During the nineteenth century, often for Jews who were increasingly alienated from their own tradition, the “medieval” functioned primarily as a bearer of identity in a rapidly changing and secular world. Each chapter in Encountering the Medieval in Modern Jewish Thought addresses a different return to the medieval, ranging from the Enlightenment to the contemporary period, that clothed itself in the language of renewal and of retrieval. The volume engages the full complexity and range of meaning the term “medieval” carries for modern Jewish Thought.
E-Book