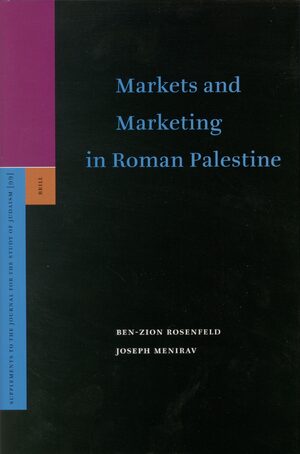 Markets and Marketing in Roman Palestine
Series: Supplements to the Journal for the Study of Judaism, Volume: 99
Authors: Ben-Zion Rosenfeld and Joseph Menirav
The book presents a variety of topics relating to the market in Roman Palestine. The book deals with the main elements of commercial life – the different types of markets and the entities and figures that played a part in it. It portrays the process by which the flow of goods in the market occurs – from the end of the production process, via the entire range of middlemen, to the end user.
A chapter is devoted to the pricing of merchandise in the economy of Roman Palestine. It offers a comprehensive framework which includes the techniques by which prices were determined and enforced. Other chapters deal with the image of the different market vendors, as viewed by the public and by the Jewish sages, and the commercial activity that took place in and around the synagogues.
The book is based on a combination of rabbinic, literary and archaeological sources as well as epigraphic findings. It depicts the economy of Roman Palestine against the backdrop of the Roman Empire.
Hardback