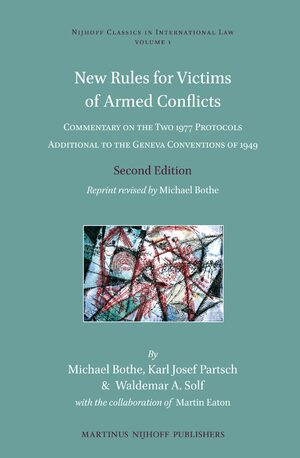 New Rules for Victims of Armed Conflicts
Commentary on the Two 1977 Protocols Additional to the Geneva Conventions of 1949. Second Edition. Reprint revised by Michael Bothe
Series: Nijhoff Classics in International Law, Volume: 1
Author: Michael Bothe
It is a major cultural achievement that violence in armed conflicts is restrained by international legal rules. As the nature of these conflicts changes, these rules have to be adapted accordingly in order to provide effective protection for the victims. The adoption of the two Protocols Additional to the Geneva Conventions in 1977 was a major step in this development. The authors, who were involved in the negotiation of these two treaties, give a first hand account of the meaning of the text and the intent of the negotiators. The book is, thus, an important tool to better understand and implement these treaties which have proved their salutary importance in the all too many conflicts during the last decades. The current volume is a revised reprint, with new introductory materials, of the original text published in 1982.
E-Book