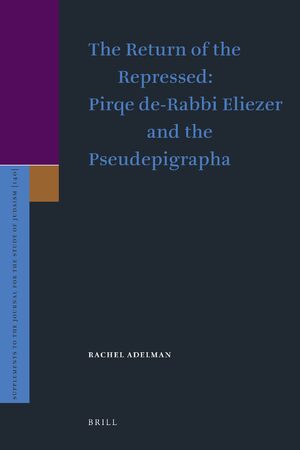 The Return of the Repressed
Pirqe de-Rabbi Eliezer and the Pseudepigrapha
Series: Supplements to the Journal for the Study of Judaism, Volume: 140
Author: Rachel Adelman
This study analyzes mythic narratives, found in the 8th century midrashic text Pirqe de-Rabbi Eliezer (PRE), that were excluded, or ‘repressed’, from the rabbinic canon, while preserved in the Pseudepigrapha of the Second Temple period. Examples include the role of the Samael (i.e. Satan) in the Garden of Eden, the myth of the Fallen Angels, Elijah as zealot, and Jonah as a Messianic figure. The questions are why these exegetical traditions were excluded, in what context did they resurface, and how did the author have access to these apocryphal texts. The book addresses the assumptions that underlie classic rabbinic literature and later breaches of that exegetical tradition in PRE, while engaging in a study of the genre, dating, and status of PRE as apocalyptic eschatology.
E-Book (PDF)

Throughout the midrash Pirqe de-Rabbi Eliezer (PRE), motifs are recycled to connect primordial time to the eschaton. In this paper, I read passages on the well “created at twilight of the Sixth Day” in light of Bakhtin's notion of “chronotope” (lit. time-space). The author of PRE disengages the itinerant well from its traditional association with the desert sojourn and links it, instead, to the foundation stone of the world (even shtiyah) at the Temple Mount. The midrash reflects the influence of Islamic legends about the “white stone” around which the Dome of the Rock was built (ca. 690 C.E.). Over the course of the discussion, PRE is understood in terms of the genre “narrative midrash” and compared to classical rabbinic literature in order to illustrate changes in both form and content arising from the author's apocalyptic eschatology.