Clear All Modify Search
Download Citations
Page:12
Love as that which Binds Everything Together? The Unity of 2 Corinthians Revisited in Light of Aγαπ- Terminology
Author: Reimund Bieringer

Love as that which Binds Everything Together?The Unity of 2 Corinthians Revisited in Light of Αγαπ- Terminology
Author: Reimund Bieringer 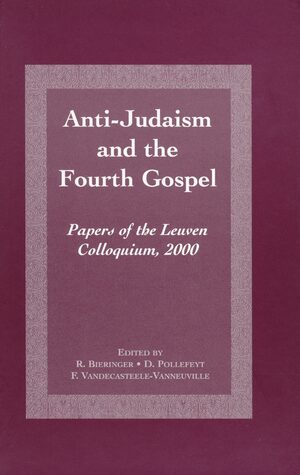 Is the Gospel of John anti-Jewish? What would this mean in the context of the original writer, of his community, the final text and its first readers? Who, precisely, are the Ioudaioi who are so scathingly criticized in the Gospel - “Judeans”, perhaps, or some other more specific group than the Jewish nation as a whole? What are the implications for New Testament study and for Christian theology in the light of the troubled history of relations between Judaism and Christianity?

The papers in this volume were presented at the special international colloquium held in January 2000 in Leuven, Belgium, which was convened to assemble the world’s leading experts on John’s Gospel and issues of anti-Judaism for a thorough assessment of the state of the question.
The result is a fascinating panorama of the issues and of current approaches to them, and an extremely valuable resource for further work on anti-Judaism in the Christian tradition.

1. Wrestling with Johannine Anti-Judaism: A Hermeneutical Frame-work for the Analysis of the Current Debate - Reimund Bieringer, Didier Pollefeyt, Frederique Vandecasteele-Vanneuville
2. The Embarrassment of History: Reflections on the Problem of ‘Anti-Judaism’ in the Fourth Gospel - James D.G. Dunn
3. Anti-Judaism in the Fourth Gospel as a Theological Problem for Christian Interpreters
R. Alan Culpepper
4. The Fourth Gospel and the Salvation of Israel: An Appeal for a New Start
Stephen Motyer
5. Anti-Judaism in Revelation? A Response to Peter Tomson - Jan Willem van Henten
6. Anti-Judaism in the Fourth Gospel - Judith M. Lieu
7. Escape Routes as Dead Ends: On Hatred towards Jews and the New Testament, Especially in the Gospel of John - Simon Schoon
8. The Coming Son of Man Became Flesh. High Christology and Anti-Judaism in the Gospel of John - Bertold Klappert
9. “Abraham is our Father” (John 8:39)The Gospel of John and the Jewish-Christian Dialogue - Hendrik Hoet
10. Biblical Thinking as the Wisdom of Love - Roger Burggraeve
11. The Identity of the ‘Jews’ for the Readers of John - Johannes Beutler
12. The ‘Jews’ in the Gospel of John - Henk Jan de Jonge
13. The Depiction of ‘the Jews’ in John’s Gospel. Matters of Behavior and Identity - M.C. de Boer
14. Speaking of the Jews .‘Jews’ in the Discourse Material of the Fourth Gospel - Raymond F. Collins
15. ‘Jews’ in the Gospel of John as Compared with the Palestinian Talmud, the Synoptics and Some New Testament Apocrypha - Peter J. Tomson
16. ‘Jews’ and Jews in the Fourth Gospel - Adele Reinhartz
17. The Nicodemus Enigma: The Characterization and Function of an Ambiguous Actor of the Fourth Gospel - Jean Marie Sevrin - 18. “Salvation is from the Jews.” The Parenthesis in John 4:22b - Gilbert van Belle
19. John and Judaism - C. Kingsley Barrett
20. “You Are of Your Father the Devil” in Its Context: Stereotyped Apocalyptic Polemic in John 8:38-47 - U.C. von Wahlde
21. Scriptural Dispute between Jews and Christians in John: Literary Fiction or Historical Reality? John 9:13-17, 24-34 as a Test Case - Maarten J.J. Menken
22. The Farewell Discourses (John 13:31–16:33) and the Problem of Anti-Judaism - Jean Zumstein
23. The Gospel of John: Exclusivism Caused by a Social Setting Different from That of Jesus (John 11:54 and 14:6) - James H. Charlesworth
24. Anti-Judaism in the Book of Revelation - Jan Lambrecht
25. The Canon – Understanding of Revelation – History of Reception and Effects. Problems of a Biblically Oriented Theology in the Face of Israel - Hans Hermann Henrix
Hardback 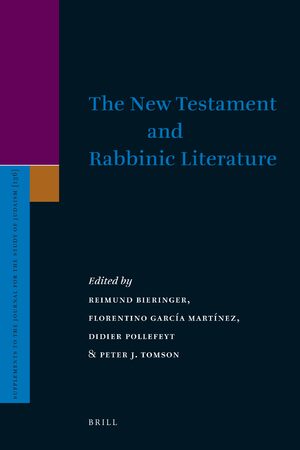 The New Testament and Rabbinic Literature
Series: Supplements to the Journal for the Study of Judaism, Volume: 136
Editors: Reimund Bieringer, Florentino García Martínez, Didier Pollefeyt and Peter Tomson
The present book brings together the contributions of the foremost specialists on the relationship of the New Testament and Rabbinic Literature. It contains the proceedings of a Symposium held at the K.U.Leuven in January 2006. The contributors, from different European countries as well as from Israel, present in detail the history of rabbinical scholarship by Christian scholars and deal with the main issues in the study of rabbinic materials. As could be expected, much attention is given to halakhic issues, but literary questions in Midrash, Targum and Mystical Literature are also dealt with. All contributions are in English, and the volume is completed with a very large “cumulative bibliography” which will enhance its usefulness.
E-Book

Second Corinthians in the Perspective of Late Second Temple Judaism
Series: Compendia Rerum Iudaicarum ad Novum Testamentum, Volume: 14
Editors: Reimund Bieringer, Emmanuel Nathan, Didier Pollefeyt and Peter J Tomson
In the framework of a larger research project into ‘New Perspectives on Paul and the Jews’, eight scholars from Europe, Israel, and North America join forces in querying Paul’s relationship to Jews and Judaism. The sample text selected for this inquiry is the Second Letter to the Corinthians, a document particularly suited for this purpose as it reflects violent clashes between Paul and rivalling Jews and Jewish Christians. While the first three articles address more general literary and historical questions, the following five present in-depth case studies of much-studied passages from the letter and the underlying issues. An introductory essay queries how in the case at hand we can gain an adequate understanding of Paul’s theology while fully respecting his particular place in Judaism.
E-Book